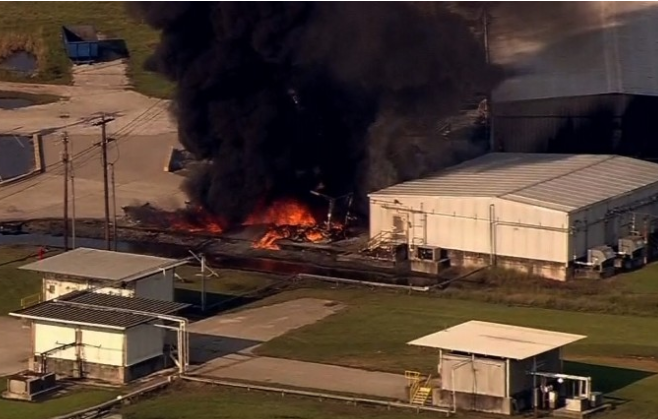 A chemical fire has again broken out at a formerly flooded chemical plant in Crosby, Texas, that caught fire one day earlier.
Aerial video on CNN showed flames and black smoke rising from a building at the plant of Arkema, a chemical and materials company northeast of Houston. The plant makes liquid organic peroxides used primarily in the production of common consumer products, ranging from headlights assemblies for the automotive industry, to PVC for pipes, packaging and siding.
Arkema shut down the facility as Harvey approached last week. It evacuated employees and residents within 1.5 miles of the plant as a precaution after it flooded. Arkema said the evacuation zone remained in place and that there was “evidence suggesting” other fires may break out.

The rain, mercifully, has stopped in southeast Texas. But a week after Hurricane Harvey, boaters still are shuttling people away from a few high-water areas as millions struggle with what the storm has left — tens of thousands of destroyed homes and altered lives, and grim efforts to find those who may not have survived.

At least 47 people have died from the storm. Other statistics only begin to hint at the scope of the punishing deluge and what the months of recovery will entail:

Full details, video and more news on the Texas/Houston floods via CNN here