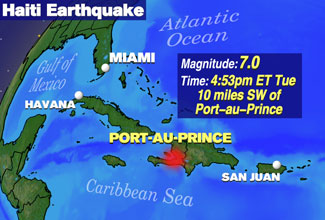 PORT-AU-PRINCE, Haiti – Haitians piled bodies along the devastated streets of their capital Wednesday after the strongest earthquake to hit the poor Caribbean nation in more than 200 years crushed thousands of structures, from schools and shacks to the National Palace and the U.N. peacekeeping headquarters. Untold numbers were still trapped.

The devastation was so complete that it seemed likely the death toll from Tuesday afternoon’s magnitude-7.0 quake would run into the thousands.

International Red Cross spokesman Paul Conneally said an estimated 3 million people may have been affected by the quake and that it would take a day or two for a clear picture of the damage to emerge.

France’s foreign minister said the head of the U.N. peacekeeping mission was apparently among the dead. The archbishop of Port-au-Prince, Monsignor Joseph Serge Miot, was also killed, Father Pierre Le Beller said from France after speaking to missionaries who pulled his body from the rubble.

People pulled bodies from collapsed homes, covering them with sheets by the side of the road. Passersby lifted the sheets to see if a loved one was underneath. Outside a crumbled building the bodies of five children and three adults lay in a pile.

United States and other nations began organizing aid efforts, alerting search teams and gathering supplies that will be badly needed in the Western Hemisphere’s poorest country. The international Red Cross and other aid groups announced plans for major relief operations.

“Haiti has moved to center of the world’s thoughts and the world’s compassion,” said British Prime Minister Gordon Brown.

Haitian President Rene Preval told the Miami Herald that he had been stepping over dead bodies and hearing the cries of those trapped under the rubble of the national Parliament building, describing the scene as “unimaginable.”

Tens of thousands of people appear to have lost their homes and many perished in collapsed buildings that were flimsy and dangerous even under normal conditions.

“The hospitals cannot handle all these victims,” Dr. Louis-Gerard Gilles, a former senator, said as he helped survivors. “Haiti needs to pray. We all need to pray together.”

Speaking from Port-au-Prince, Frank Thorp Jr. told NBC’s TODAY how he helped dig through the rubble to rescue his American wife Gillian from under a collapsed building. She had been trapped for 10 hours, he said.

Thorp said his spouse, who is a missionary in the country, was “doing OK” and suffered only bruises during her ordeal. However, a colleague who had also been buried lost both of her legs.

Thorp described conditions in Port-au-Prince as “worse than a war zone.”

Even relatively wealthy neighborhoods were devastated.

An Associated Press videographer saw a wrecked hospital where people screamed for help in Petionville, a hillside district that is home to many diplomats and wealthy Haitians as well as the poor.

At a destroyed four-story apartment building, a girl of about 16 stood atop a car, trying to peer inside while several men pulled at a foot sticking from rubble. She said her family was inside.

“A school near here collapsed totally,” Petionville resident Ken Michel said Wednesday after surveying the damage. “We don’t know if there were any children inside.” He said many seemingly sturdy homes nearby were split apart.

U.N. peacekeepers, many of whom are from Brazil, were distracted from aid efforts by their own tragedy: Many spent the night hunting for survivors in the ruins of their headquarters, where more than 100 people are missing.

U.N. peacekeeping chief Alain Le Roy said Wednesday that about 10 people have been pulled out, many badly injured and “less than five” are confirmed dead so far.