Home > News > Government to take a further 6 months to... 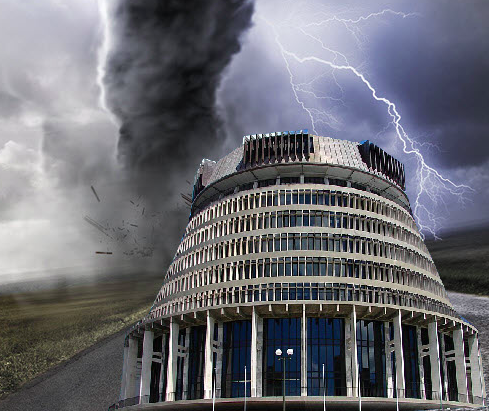 Updated: There’s more frustrating news about the New Zealand Government’s response to the open weather data review and also the MetService/NIWA double up. Minister Megan Woods’ Office confirmed to WeatherWatch.co.nz on Sunday that, once again, the can is being kicked down the road for at least another half year as the new Minister asks “officials” to look at matters raised in the review in more detail. It’s hardly the enthusiasm of “Let’s do this”.

It’s one step forward one step backwards. While terrific news this Government is looking further into the matter, the wording about sending back to officials for more reviewing could’ve been taken from the previous National Government which used ‘nameless officials’ behind the scenes to stall the report and delay any actual action.

In multiple formal emails and OIA requests to the last Government we asked who these powerful nameless officials were – we never once got a name yet these officials appear to control everything about this review and continue to do so this year.

The Government has also told WeatherWatch.co.nz to raise any serious complaints relating to NIWA’s behaviour with the NIWA board and not the Government or Minster – something we once tried, and failed, with MetService. It appears NIWA has little to no Government oversight, just like MetService. NIWA is a Crown Research Institute with over 100 million dollars ever year in tax funding and is 100% owned by the New Zealand public. NIWA no longer engages with WeatherWatch despite being New Zealand’s largest private forecaster or the fact the last Government said they must do – in fact Minister Joyce’s Office often passed on emails to NIWA due to us not getting replies when we directly asked NIWA a weather or climate question. A terrible system that has only become worse due to NIWA’s newly founded aggressive commercial asperations which trumps any public good.

The biggest frustration in our view is that the New Zealand Government can’t walk and chew gum. If this time line was in the private sector it wouldn’t be acceptable, you’d lose your job. We started this process three elections ago and nothing has physically changed and by the looks of it another year with no change is ahead.

WeatherWatch.co.nz founder Philip Duncan has previously met face to face with Minister Joyce for an official meeting and twice with Minster Dunne about this, however the Office of Minister Woods yesterday told us in the first instance we would only be meeting with an Advisor and not the Minister herself. We are unsure why we can’t speak to the decision maker directly and sooner.

The independent review was completed in March 2017 by MBIE with the last Government refusing to engage with WeatherWatch.co.nz after that point due to the election. Clearly because the review said they need to make actual changes. The previous Government ignored our requests for months. Under the new Labour Government – and a lot of public pressure from WeatherWatch – Minister Woods released this stalled official report earlier in January this year. The official report 100% backed everything WeatherWatch.co.nz had been saying for a decade. We really appreciate the Minister releasing the review – something the previous Government clearly hid from the public on purpose.

The Commerce Commission has already stated that ALL tax funded weather data should be open for all to use – so it’s weird that yet more people behind the scenes have to look further into this. It feels like people are working to get out of having to actually make change. However the Commerce Commission will not address why the Government now owns the three largest commercial forecasters in New Zealand until a decision has been made by the Minister on this review. So no change continues as they can both point to each other for nothing happening.

While WeatherWatch.co.nz is clearly utterly frustrated and exhausted at how many years are passing we do thank Minister Woods and her Office for engaging with us – and we hope transparency returns to the process this year. We want to be a positive force.

We started this fight before we were even a business. Lack of open weather data affects all New Zealanders, from the pilots who fly you places to farmers who grow you food. There are clear economic benefits to all New Zealanders for opening up tax funded data and removing the Government monopoly and it shouldn’t have to cost the public any extra money. Did New Zealand suffer when the Government gave up the Telecom monopoly? No, it allowed a new industry to flourish, prices to drop and services to lift enormously.

The independent review pointed out that no other country on earth operates their weather industry in this manner and strongly compared NZ to Australia, UK, Canada and USA who all put the public before profits when it comes to weather.

This has now moved beyond the realm of the ridiculous & into the more serious one of the government using its virtual monopoly power to bully competition into submission. A bit like Putin’s or Muldoon’s New Zealand, hardly relentlessly positive https://t.co/2FkYoXPiKp

The word government is not a proper noun therefore it only requires a capital G at the start of a sentence or when referred to as a specific government as in the New Zealand Government.

What if we’re saying New Zealand Government but dropping the New Zealand part in front of it to save time and repetitiveness. The way people say New Year’s instead of New Year’s Eve?
Cheers for the feedback though!
WW