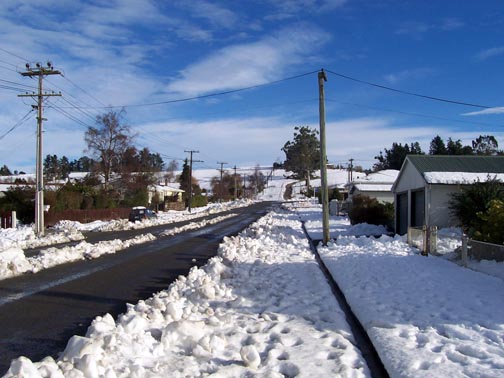 Although it’s Spring, it was a little over 3 years ago that an unexpected snowfall hit parts of the Canterbury region, catching many Cantabrains and forecasters on the hop.Although little has fallen over the region in the last 3-4 months, it was a very different story 3 winters ago.

The snowstorm that struck the South Island on June 11-12 brought between 75cm and 90cm of snow to the townships of Fairlie and Burkes Pass in the Mackenzie district. Ashburton received 38cm and Timaru 24cm.

The last similar-sized storm was on August 5-6, 1973, when 90cm of snow fell at Methven, in Mid-Canterbury, when 100,000 sheep were killed and the power supply and communications were badly disrupted, as in the storm in 2006.

In November 1967, between 60cm and 90cm fell in the South Island’s Mackenzie district. Up to 70,000 sheep were killed, there were widespread power outages and crop losses, and some called it the worst snowfall in living memory.

I was living on a farm not far from Methven during the 1973 storm. Snow was about fence height and very wet. Bits of the house tore off as the heavy snow dragged down the roof. Lines down and power off for over a week. Bit hard with two young kids but we survived. Good old coal range and open fire. Walking was exhausting and tennis racquets were turned into snow shoes. Took 3 weeks for some piled snow to melt. Great experience in many ways!

I remember the day clearly,though it didnt snow in Auckland the power went off that day and the snow lay in some places for a few weeks after down south.

I remember this snow storm of 3 years ago, as i live in Kirwee, Canterbury, we had no power for 3 days and the whole place seemed to shutt down. Also after having such a big snow storm in so many years, i beleive the main item for the news that night was the power cut Auckland had, big deal, we out here have power cuts all the time. Get Real the rest of NZ.