GIF: Roaring Forties roars up across New Zealand. What is it?

Windy weather is affecting many parts of the country today – and will do so off and on for the next week and a half. The Roaring Forties is a belt of wind that wraps around the lower Southern Hemisphere, between latitudes 50 (further south of NZ) and 40 (which covers the South Island and lower North Island (and you can see it in the trees which grow on an angle from about Taranaki and Manawatu southwards, and of course Windy Wellington and the big Canterbury nor’westers are all thanks to being in the Roaring Forties belt of winds from the west).

Today and across the next week we’re going to see this belt of wind crossing New Zealand, lifting north of the 40s latitude around Wanganui and fanning out as far north as the sub-tropics. At times it will swing more southerly and tap into colder air around Antarctica, lifting it up across New Zealand. This is more likely the further south you head – the further north you go the more the airflow comes from out of the Australia region, even if it turns more southerly.  Colder air is most likely this weekend and Monday next week at this stage.

Most of the wind being generated around New Zealand at the moment is coming from south of a huge high pressure system currently over mainland Australia that stretches across the entire country, a stunning 4000kms (see picture below the GIF). The anticyclonic flow around this High (or Anticyclone) is pushing the air into the Southern Ocean and around to New Zealand as this strong westerly quarter flow (bringing a mix of NW, W and SW winds for the most part here).

If you think today feels more like spring than winter, you may be correct – as the Roaring Forties is most noticeable in spring when it brings weather almost identical to today and Friday. Colder air will shoot north later on Friday, the weekend and Monday – but next week has a mixture of milder westerlies and cooler sou’westers. 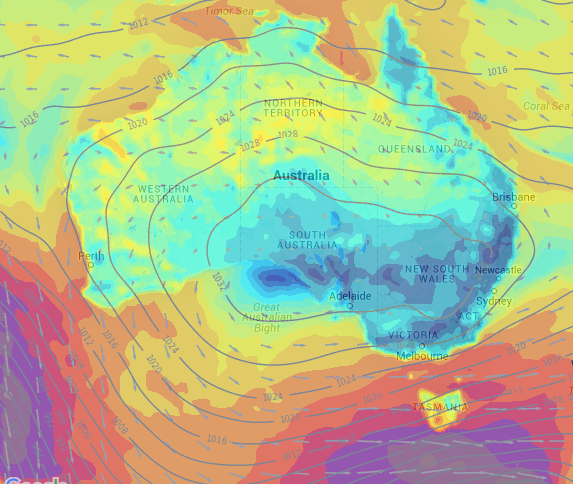 The huge high over Australia is almost perfectly covering the continent – and Australia is 4000kms wide! (two and a half times the length of New Zealand.  See 14 days of wind maps by going to our MAPS tab.