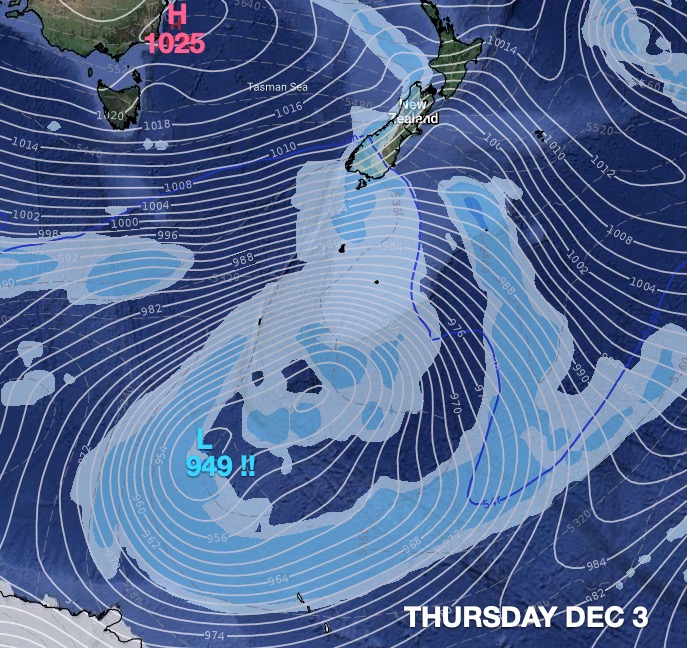 The Southern Ocean’s weather looks more like the depths of winter. The situation means more windy weather across parts of New Zealand today and big seas to the south, making for dangerous beach conditions in Southland, the West Coast and coastal Otago.

The reason why we’re saying this looks more like the depths of winter isn’t to do with temperatures, it’s do with the power, size and depth of the low south of NZ. This storm has air pressure down into the 940s hectopascal range today. To give you perspective, Hurricane Laura in late August this year was the strongest hurricane on record to make landfall in Louisiana. At its lowest point at sea, this hurricane dropped down to 937hPa.

The Southern Ocean storm won’t get any closer to NZ than it will be today and the centre is closer to Antarctica than southern NZ. Still, waves of over 12 metres will be just south of Stewart Island today.

Waves of 9 to 10 metres will crash into the remote south west corner of Fiordland National Park while in Southland itself waves of 5 to 9 metres will be possible.

3 to 5 metre waves are likely on the West Coast and 3 to 4 metres later around in Otago Peninsula.

WeatherWatch.co.nz has been often recently talking of how the Southern Ocean is stormier than usual and is reversing La Nina-like weather conditions in NZ, especially for the first half of December.

Larger areas of calmer weather are more likely as we head towards mid December.