Gales at both ends of NZ 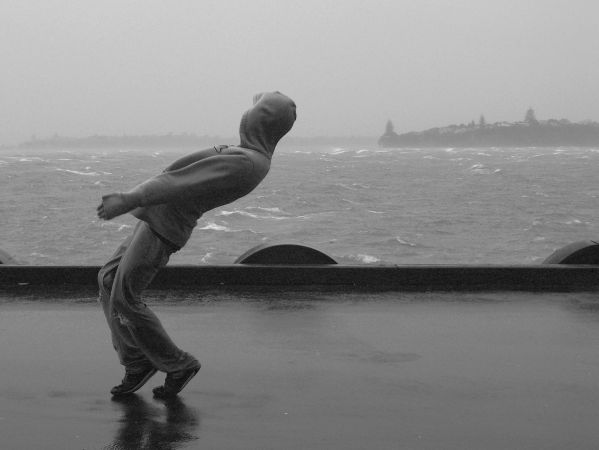 Gale force winds are now pounding both ends of New Zealand as a weather bomb departs to the east of the North Island and a winter storm brushes the deep south.

The gales are hammering Invercargill this evening with gusts to 110km/h – strong enough to cause damage to trees, powerlines and roofs.

The winter storm, while mostly missing New Zealand, has already seen temperatures drop to -1 on the islands south of the mainland and to just 3 degrees in Invercargill.  Snow and possible blizzard conditions are tonight being predicted across Southland and Otago according to WeatherWatch.co.nz and motorists are reminded to be prepared for extreme winter driving conditions.

Winds on Stewart Island are now gusting to 120km/h.

Meanwhile gales are still hammering the Far North with gusts to 90km/h.  Gale force winds are now confined to only the most exposed parts of Auckland with gusts exceeding 80km/h.

Heavy showers are now moving in to the Auckland area however the strong winds should see them move through quickly.  Squally conditions may see isolated wind gusts to 110km/h, strong enough to cause minor damage.

A rapidly deepening low, known as a ‘weather bomb’ is continuing to blast the upper half of the North Island this afternoon with gale force winds.

As of 2:30pm gales gusting 100km/h were continuing to affect Auckland City while gusts to 70km/h are affecting eastern parts of East Cape.  Gales gusting 90km/h are blasting the Far North.

The low is now lying north east of East Cape and still rapidly deepening – giving it the official title of a weather bomb, where the air pressure falls more than 24 hectopascals in 24 hours.  (the unit to measure air pressure).

Showers across Auckland are likely to remain through until this evening’s Bledisloe Cup match at Eden Park however due to the strong winds they should be brief.  Strong winds are likely all weekend in Auckland but should ease during Sunday.

Meanwhile another cold snap is approaching the South Island.  The bitterly cold air now lies on the southern shores of Stewart Island with temperatures plummeting on the islands south of New Zealand.  Current temperatures 500kms south of Invercargill are at -1 this hour with strong but warmer winds ahead of the front, gusting to 80km/h, have put Invercargill on 7 degrees

Sleet or snow is possible across Southland and Otago this evening, overnight and tomorrow.  Motorists are advised to be prepared for icy, blizzard-like, conditions with gales and snow possible in the area over the next 24 hours.

I was surprised no wind warnings were issued. I had to rush outside and collapse the awning over the deck at 5am after being woken by the gusts of wind. Later in the day I saw reasonable sized branches strewn under large trees whereever I drove. So the previous low had wind warnings for Auckland but nothing occured in Auckland like today, and today none of these winds were forecast. I would have preferred not to have been naked on the deck at 5am in gusting wind with a windsock but I understand the nature of forecasting and its difficulties. This is not intended to be a criticism.

Appreciate your comments.  I agree it’s certainly unfortunate that there was so much media coverage about last week’s storm and nothing about this mornings… I think the rapid development caught us all a little by surprise… and the fact that it deepened so close to land.  The weather models had the low out east of East Cape by noon Saturday but instead it was only just clearing Bay of Plenty.

Certainly proving to be a tricky winter to forecast for.  We’re learning from any mistakes we may have made – we have debriefs every time we get something significantly wrong.  It’s very important to us at WeatherWatch to be transparent about forecasts that you – our readers – are unhappy with.  After all we wouldn’t exist without your support!

(working and watching the All Blacks!)

we experienced a wild night weather wise with high winds causing a lot more damage than the “storm” that was forcast for the weekend of the 10th. Several trees were badly damaged or lost completely and a haybarn blown away, guttering lost off another building. What happened to the warnings?????

Hi Jeremy – see my reply above re: warnings/forecasts.

Whangarei is still suffering wildish cold wind and frequent heavy showers, it did much more damage last night than last week as on my walk about with the dog we came across heaps of foliage, shrubs and broken tree limbs all over the place. So although not as sustained over a long period of time it did have a big effect.

Definately a night huddled up indoors.