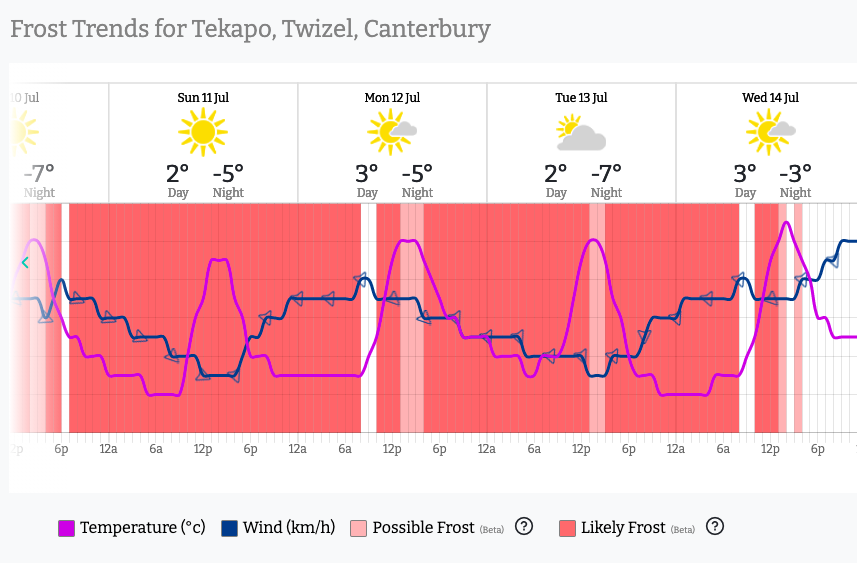 As another surge of polar air moves in later today it’s high pressure later this weekend and into next week that will lock in this cold and create for severe frosts in the South Island’s interior and heavy frosts for some in the North Island.

RuralWeather.co.nz expects overnight lows to dramatically drop in the South Island from Sunday night with lows of -7C to -12C in the high country. Places like Tekapo and Twizel and surrounding areas are most exposed to this extreme cold.

Following the wet/snowy weather falling again tonight and Saturday morning it will significantly increase the chances of black ice, mostly on South Island roads and highways. Black ice is caused when water (from rain or snow melt) freezes overnight and is impossible to see. Daytime heat may melt it, but it refreezes each night until the moisture has gone. Black ice is most likely found on tight, shady, corners but can also be found on stretches of straight open road. Motorists should take extra care and be extra vigilant to the ‘skidding’ road signs showing ice, some of which are up all year around but now is the time those road signs matter most!

Central Otago and Northern Southland will also be bitterly cold with overnight lows down to -4C to -6C while places like Queenstown to Arrowtown will drop to -2 to -4C in some locations.

The North Island’s Central Plateau will be the coldest in the north, with overnight lows around Waiouru, Ohakune and National Park getting down to -4C next week. But nearby Taupo and Rotorua are more likely to be caught up in the airflow of the northern low pressure system. Overnight lows for those two main centres gets down to about +2C to -1C.

CHECK THE NZ FROST FORECASTER
Simply go to www.RuralWeather.co.nz and click/tap on the Frost tab at the top of the page – every single location in NZ is covered!

Note the Frost graphs for Tekapo show frost risk for 24 hours on Sunday and Tuesday! That doesn’t happen very often.