Home > News > Front to start the week then settled...

Front to start the week then settled 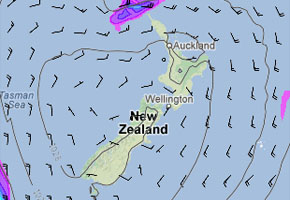 This is an update to how the week ahead is looking from yesterdays story, things are looking fairly similar however the front later in the week may take a little longer to come together and the northwesterly airflow preceding it doesn’t look to be as strong.

A cold front will brush north over the country tomorrow mainly affecting eastern coastlines of both islands. There won’t be a lot of impact from the front however it will bring quite cool temperatures and a few snow flurries on the South Island ranges inland to about 500m, any accumulations will not be large however. An anticyclone sitting in the Tasman Sea quickly pushes in overnight.

Come Tuesday the remnants of the front linger about the east coast of the North Island and a small trough hangs back over the upper North Island north of Bay Of Plenty and potentially the upper South Island about Tasman, this may bring a few showers mainly in the afternoon. The rest of the South Island receives mainly settled weather on Tuesday after a possible light frost in some inland areas.

On Wednesday and Thursday the anticyclone mentioned above remains in control over the country, expect mostly sunny weather with sea breezes during the afternoons in coastal areas. Perhaps the low risk of a isolated shower in inland areas of both islands north of about Canterbury, the slightly higher risk of the two will be about the North Island.

Similar weather for the North Island on Friday as on Thursday however the South Island starts to develop a westerly airflow ahead of a front which moves onto the lower south later in the day.