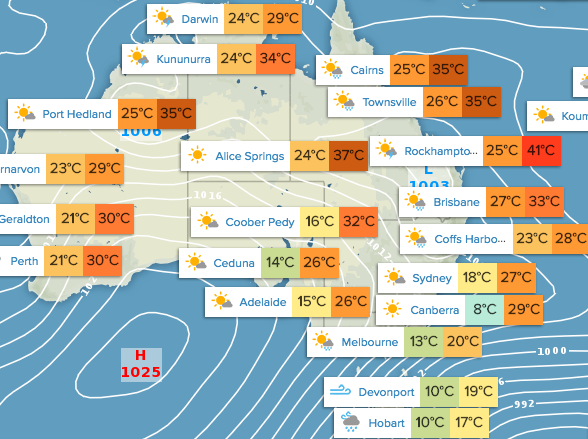 Extreme weather has been the talk of Australia, but thankfully the worst affected areas will see normality return.

On Friday, South Australia lost electricity with very hot temperatures. On Saturday, New South Wales had its hottest day on record and then on Sunday the same state saw its worst fire weather on record. The start of this week heatwave conditions are continuing in eastern Queensland.

But now the nation can celebrate the development of some tame weather.

A high pressure system has moved into the Great Australian Bight, bringing calmer and cooler weather across South Australia. The ridge is also spreading over New South Wales, where winds and temperatures have dropped markedly, helping fire fighters take control of the state’s many blazes. In fact below average temperatures are spread from southern WA to Bourke and almost everywhere further south.

In Tasmania and Victoria it is quite chilly today in the wake of a strong cold front. Thankfully winds are now beginning to ease as the high approaches.

In the coming weeks we will again see some severe weather, but whilst we wait to see where it strikes we can enjoy a brief reprieve.