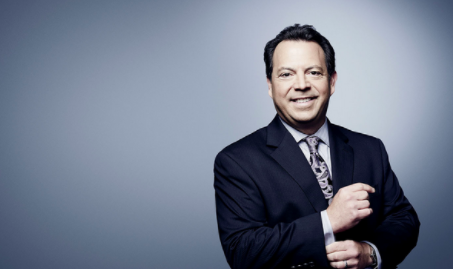 For those watching CNN International or CNN.com, due to Hurricane Harvey, you have no doubt seen Chad Myers. Based in Atlanta, Chad is the meteorologist most often used to cover breaking US weather or natural disaster news, like hurricanes, snow storms and tornado outbreaks, tsunami etc.

WeatherWatch.co.nz founder and head forecaster Philip Duncan had a chance to meet Chad in 2009 at the CNN Center in Atlanta – then again a few years ago with our then news editor and current casual contributor Drew Chappell.

Chad is full of passion, demands accuracy (sound familiar?!) and has a personality that makes for great TV. We at WeatherWatch have learned a great deal from Chad, watching how he explains the complicated parts of weather and science and delivers it in an easy to understand way to the hundreds of millions of Americans – and many more around the globe.

He makes you smile and he genuinely knows his stuff – it’s why he’s in the top job at CNN.  We are stoked Chad was especially keen to be part of “Friends of WeatherWatch” (which we ran a few years ago, before the last NZ election).

WeatherWatch works well with Chad’s bosses and team at CNN, they are a truly great crew and quite separate to the #FakeNews political news division we so often unfairly hear about these days from a certain Twitter account.

We talked to Chad about his role at CNN Weather – and we exclusively ask just exactly how did he feel being mocked so intensely by comedian John Oliver on his HBO show Last Week Tonight for being a moody weatherman.

Where did you grow up and what do you recall the climate being like then?

I grew up in Buffalo, New York.  It was one of the snowiest places in America.  Other cities are just as cold, but with Lake Erie just to the west of it, the lake effect snow machine kicked in every winter.    We could get 20 centimeters of snow every night and still have to go to school.

When did you realise your passion for weather?

When I was 13, I moved to Nebraska.  So I went from the snowiest place to a state that had wild temperature swings throughout the year.  The temperature could range from -40c in the winter to 43c in the summer.

Whatâ€™s the scariest storm you have ever been in?

There was a violent tornado (winds recorded over 400kph) near El Reno, Oklahoma 2 years ago that made a crazy turn right toward us.    We were chasing the storm and were safely out of the way when it took an unpredictable left turn toward our location.   A number of other storm chasers died that dayâ€¦they were only 3 or 4 kilometers away from us.

Who is someone you admire?

I admire CNN anchor Anderson Cooper.  We have been on many beaches together waiting for hurricanes to make landfall.  He can work 36 hours without sleeping and still report on TV with clarity and confidence.

What is the best part about working for CNN?

The best part of working at CNN is that all of my co-workers are the best of the best.  They were recruited from other TV stations because they were already the best.  CNN assembles and recruits only the most talented journalists available.

Recently comedian Jon Oliver on his HBO show ran a very funny clip â€œChad Myers hates his job at CNNâ€ – how did you react to it?

“I was amazed that someone worked so hard to assemble all of those clips.  Some stories were 4 or 5 years old and they still found them somewhere in a library. I donâ€™t have HBO so I did not see it until others were emailing me about it.  It was funny and well done.”

Which is more exciting to cover out in the field – Tornadoes or Hurricanes? And why?

Thatâ€™s an easy one.  Hurricanes are boring and can take 48 hours to arrive.  Tornadoes happen in seconds with unpredictable results.

Do you have any advice for the small team at WeatherWatch?

You guys [at WeatherWatch.co.nz] do a great job and fulfil an important service to the community.   Sometimes we all focus too much that the forecast was off by 3 degrees when we should understand that 25c and 28c degrees are not that far apart and the people understand that it will be warm today.

Do you find it hard to take vacations in the US, because if you see/hear of severe weather you feel like you should be covering it?

Yes, of course, a weathermanâ€™s brain never shuts off to the weather happening around him.  We at CNN cover all of North America and not just one city.  I never travel on vacation without my storm coat, boots and my ear piece.

Youâ€™re the most passionate weather forecaster weâ€™ve come across – what is it about weather and news media that you love so much?

What we do can save lives.  If we can alert a family to deadly weather approaching, and they can react to be safeâ€¦.we win.

I enjoyed reading this, especially as he mentioned the small diff in temps being insignificant.
People complain about this! Some people like moaning!

Sometimes though that small difference is the reason for fog, or not. Frost, or not? Or will convection be triggered? Will a heat low form and cause coastal winds to strengthen? These things are extremely important to aviators, mariners and agriculturalists.

Temperatures varying by a couple of degrees is largely unimportant to the general public.

That’s the difference between what we provide as a basic communications service and what we and other forecasters charge for to those who rely on it – for example, why MPI or Civil Defence may contract to us. It takes focus, time and experience to really fine tune it as best as possible – but for the most part, when you have 1 minute to talk about your entire country in a video clip, we speak in generalities.