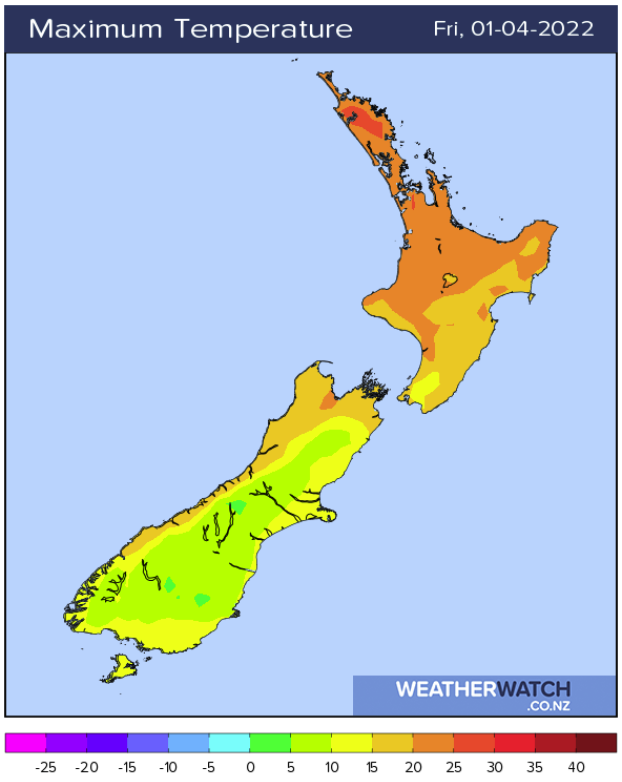 COOL IN THE EAST

Yes temperatures for eastern regions are a bit cool today thanks to southerly quarter winds. Here are some highs as follows, as you can see the further north we go in the east naturally it gets a bit warmer. Waikato and inland Northland get the warmest temperatures this afternoon reaching into the mid twenties.

Earlier this week we were talking about the potential for rain or showers for New Zealand this weekend, (especially the South Island) pushing in from a low in the Tasman Sea. Well that low looks to stay well out to our west now and settled weather is on the cards.

The North Island does see a bit of cloud about on Saturday, morning drizzle in the east, the odd isolated shower about some inland hills and ranges in the afternoon, largely dry overall though. The South Island is dry mostly with sun / cloud, just north of Greymouth in the west could pick up a shower.

Sunday is dry for all of New Zealand, areas of morning fog or cloud breaking to sun, winds will be light.

Monday is mainly settled although a few showers move into the West Coast and far south of the South Island, Tuesday has showers or some rain in the west (rain mainly about South Westland) meanwhile in the east it is dry with sun / high cloud. Wednesday continues to see showers in the west, perhaps an isolated heavy fall for the North Island with a low risk of some thunder, eastern regions are drier, warmer and have some sun with high cloud. Showers continue in the west on Thursday, mainly dry in the east again then finally on Friday rain looks to spread to many North Island regions meanwhile the South Island has showers in the east, drier weather out west.