Friday’s weather headlines (x3): A nice day in the west and south, Cold front then showers 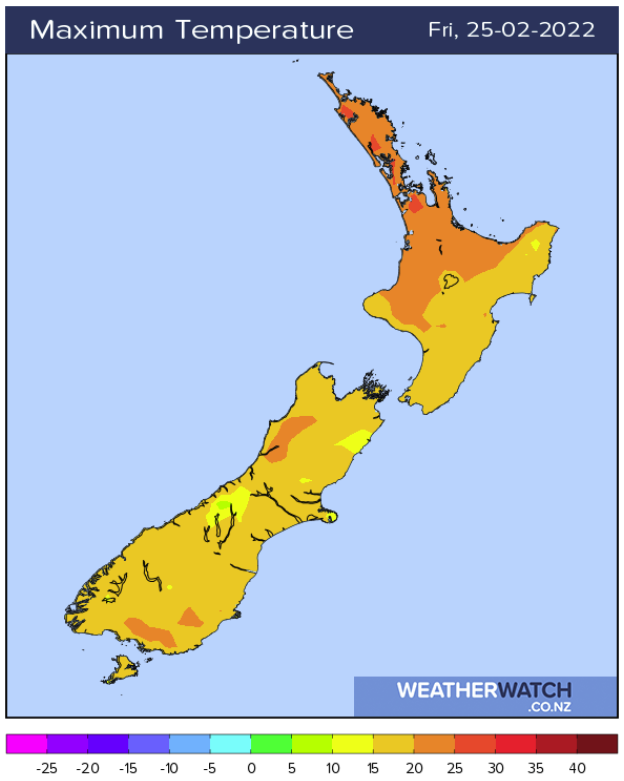 The weather out west is best today in regards to both Islands, temperatures this afternoon for the Waikato will reach into the mid twenties. The West Coast is a bit cooler but still reasonable with highs in the early twenties, although inland Buller does reach 25, it’s more the fact that winds will be light and skies clear this afternoon. Inland Southland and Central Otago will likely get into the mid twenties with light winds and mostly sunny conditions.

COLD FRONT TO MOVE IN ON SATURDAY

A cold front moves onto the lower South Island overnight or perhaps more towards dawn on Saturday and reaches into Canterbury in the afternoon bringing a drop in temperatures and showers. Conditions clear up fairly promptly once the front moves through though, the lower South Island should break to sun in the afternoon while showers for Canterbury ease evening and clear overnight. The front reaches the lower and eastern North Island in the evening with showers spreading in there.

The eastern North Island gets showers on Sunday (mainly dry for Wairarapa though) then as day wears along a few showers move in for the likes of Waikato, Coromandel and perhaps Auckland moving in from the east.

Monday sees a few showers Waikato northwards with east to northeasterly winds, perhaps a shower or two may persist for Hawkes Bay and Gisborne with a southerly airflow there.