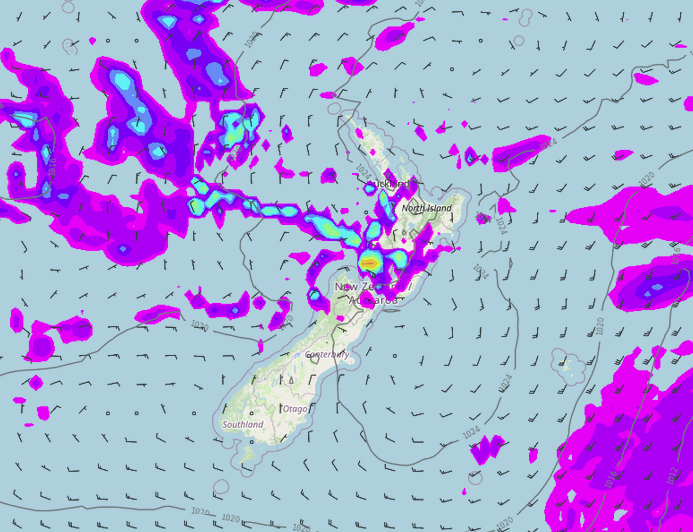 A weak front pushes over the North Island today, this links into a warm front which lies to the northwest of the South Island just offshore. This pushes into the West Coast later this evening or overnight.

Western North Island (including Central North Island)
Mostly cloudy with a few showers about, some dry areas too. Precipitation may be more persistent for Taranaki. Southeasterlies develop in the morning, tending to the north later in the day.
Highs: 11-16

Eastern North Island
Showers for Wairarapa spread northwards during the morning with southerlies, Gisborne may have some morning sun to start. Showers clear late afternoon. Later in the evening or overnight expect a few spots of rain with winds tending to the north.
Highs: 12-16

Wellington
A cloudy day with a few morning showers clearing, overnight some rain moves in as southeasterlies tend to the north.
Highs: 13-14

Marlborough & Nelson
A mostly cloudy day, there may be a morning shower for Marlborough then clearing. Later in the evening or overnight some rain moves in. Winds from the southeast.
Highs: 9-13

West Coast
Morning sun, cloud thickens before midday for Buller and North Westland then spreading southwards in the afternoon. A few showers move in this evening then turning to rain north of about Haast. Light winds swing to the northeast by midday.
Highs: 9-14

Southland & Otago
A mainly sunny day after a frosty start for Southland. Otago may have some morning cloud with a few early clearing showers then sunny in the afternoon. Light winds, tending north to northeast in the afternoon for coastal Otago.
Highs: 5-9