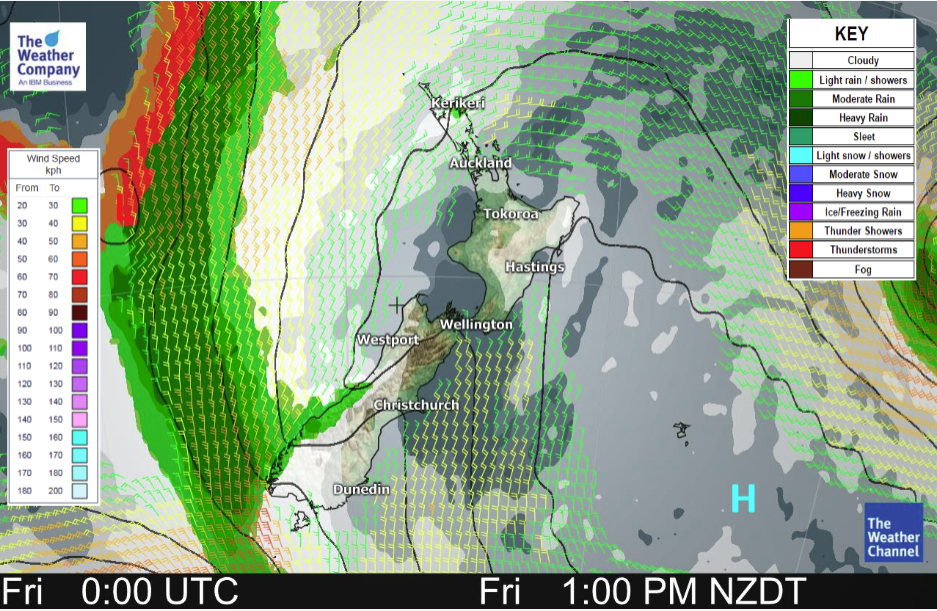 A ridge of high pressure still lies over the country today but it is weakening with a more apparent northeasterly airflow moving in.

Most regions are dry but there could be a shower or two for the northeastern North Island, also for the West Coast of the South Island.

Temperatures for eastern regions will noticeably be a bit warmer today getting into the mid twenties. Winds are moderate from the north or northeast for most.

Northland, Auckland, Waikato & Bay Of Plenty
A mix of sun and cloud, chance of a shower or two, mainly about Coromandel through to eastern Northland. Northeasterly winds.
Highs: 22-26

Western North Island (including Central North Island)
A chance of some fog first, mainly about inland areas, sunny otherwise. Light winds tend to the north or northwest in the afternoon.
Highs: 19-23

Wellington
Sunny, northerlies pick up in the afternoon.
Highs: 20-23

Marlborough & Nelson
Sunny, northwesterlies pick up in the afternoon. Northerlies for Nelson.
Highs: 20-25

Canterbury
Some morning cloud then sunny, northeasterlies near the coast, winds tend northwest inland. Northwesterlies may break through to the coast in the afternoon or perhaps more towards evening.
Highs: 23-26

West Coast
Partly cloudy, skies a bit cloudier down towards Fiordland where there will be a few showers then some overnight rain. Cloud thickens further north in the evening. Northeasterly winds.
Highs: 19-23