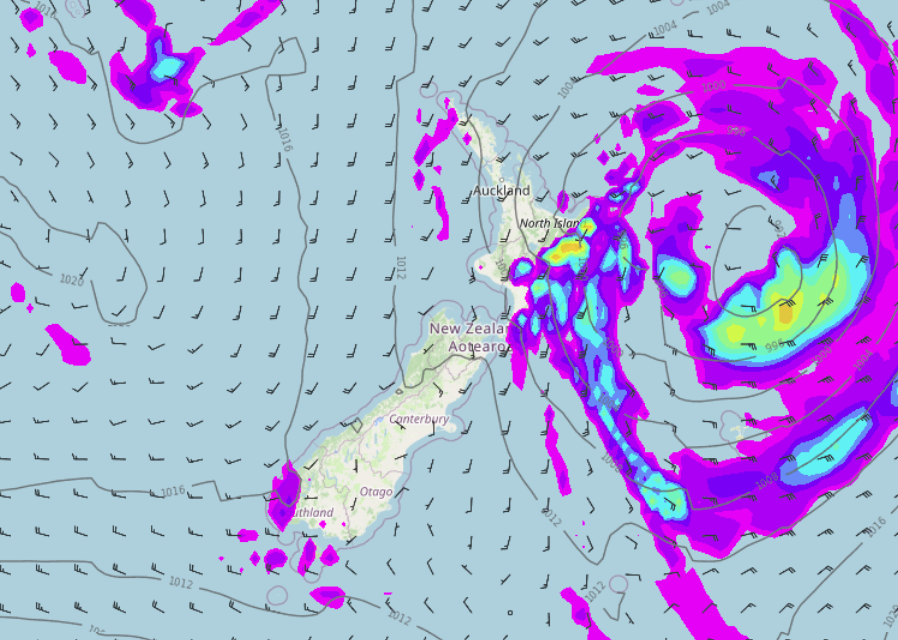 A southerly airflow pushes more rain into the eastern North Island today meanwhile a ridge of high pressure sneaks in over the South Island.

Northland, Auckland, Waikato & Bay Of Plenty
Mostly sunny with southwesterly winds, breezy at times for Auckland. Northland can expect some cloud especially in the west with the odd shower.
Highs: 23-27

Western North Island (including Central North Island)
Cloudy areas, a few showers catch the extremities of Taranaki and get into the Central Plateau at times, fresh southerly winds.
Highs: 15-21

Eastern North Island
Rain for much of the day, easing in the evening to showers. Strong southwesterlies gale about the coastal fringe.
Highs: 18-21

Wellington
Morning showers, drying out in the afternoon then some sun breaks through before dusk. Strong southerly winds, gales through Cook Strait, backing off a touch after midday.
Highs: 16-17

Canterbury
Morning cloud then sunny spells increase from afternoon, southwesterlies die out in the evening. Light easterlies from midday for South Canterbury.
Highs: 17-19

West Coast
Sunny, some cloud about southern Fiordland may bring a light shower or two. West to southwesterly winds from afternoon.
Highs: 21-24

Southland & Otago
Morning sun then some afternoon cloud as northerlies change to the west or southwest, chance of a shower for Southland.
Highs: 18-21