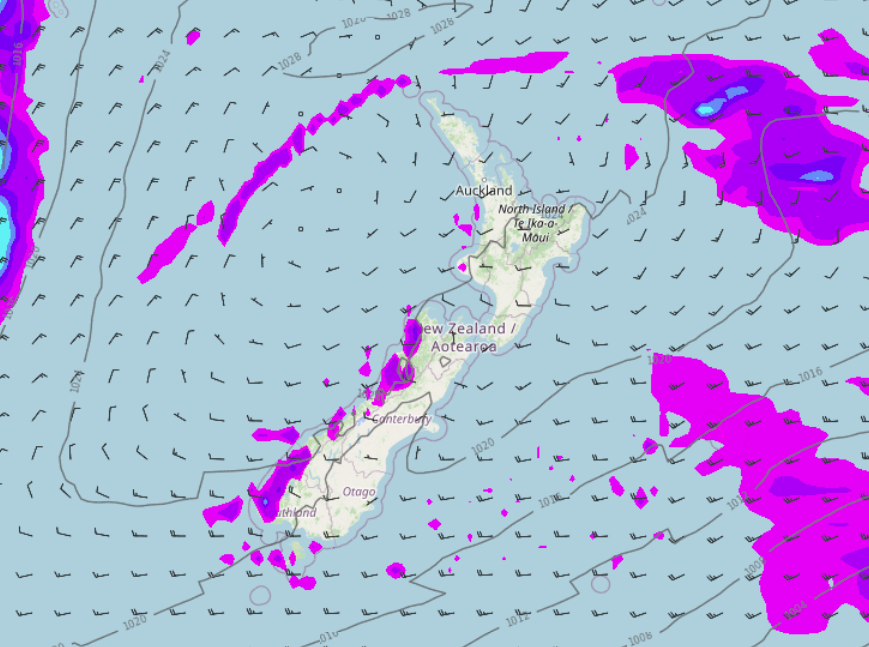 An anticyclone centered just to the west in the Tasman Sea brings mainly settled weather to New Zealand today, a light southwesterly airflow moving around this high pushes into western regions bringing some cloud and the risk of a shower or two. Sunny weather can be expected in the east.

Northland, Auckland, Waikato & Bay Of Plenty
Some cloud and a shower or two, more so in the west, southwesterly winds. The Bay Of Plenty is mostly sunny with winds tending to the north in the afternoon.
Highs: 15-18

Western North Island (including Central North Island)
A mix of sun and cloud, Taranaki has cloudy areas and the odd shower. Light winds tend west to southwest in the afternoon.
Highs: 13-16

Eastern North Island
Sunny for Wairarapa and Hawkes Bay after any morning cloud clears, Gisborne has a few showers then clearing in the afternoon with sun breaking through. Light winds tending east to northeast in the afternoon
Highs: 16-18

Canterbury
Sunny, east to northeast winds in the afternoon across the plains.
Highs: 15-18

Southland & Otago
A few morning showers for Southland then expect sunny spells, Otago has a mostly sunny day. West to northwesterly winds may tend southwest in the afternoon.
Highs: 12-18