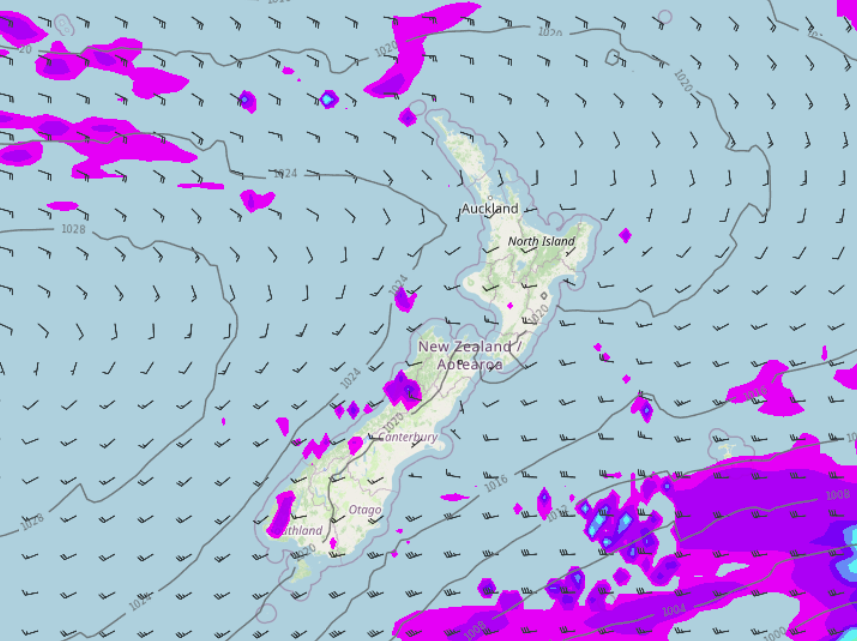 An anticyclone pushes in from the Tasman Sea today bringing mainly settled weather, a southwesterly airflow still brings some cloud and a few showers to the West Coast and far south of the South Island though. Eastern regions have good sunny weather.

Northland, Auckland, Waikato & Bay Of Plenty
Mostly sunny with a touch of high cloud, a few morning showers clear Northland. In the evening mid level cloud moves in from the west. Light winds tend southwest in the afternoon.
Highs: 19-21

Western North Island (including Central North Island)
Mainly sunny however there is some cloud south of Taranaki which pushes northwards during the afternoon. Wanganui southwards sees a light shower or two, clearing evening. West to northwesterly winds.
Highs: 14-19

Eastern North Island
Mostly sunny with light winds tending east to northeast in the afternoon. Some cloud drifts into Wairarapa late morning from the west, risk of a shower later in the day.
Highs: 18-20

Wellington
A mix of sun and cloud, chance of an afternoon shower in the north. Northwesterlies tend to the south around midday.
Highs: 17-18

Marlborough & Nelson
Sunny with light winds for Marlborough, morning southwesterlies for Nelson tending to the north in the afternoon.
Highs: 18-20

Canterbury
A sunny day, a cold start especially inland, winds are light. Later in the evening winds change southwest with some cloud across the Plains.
Highs: 18-20

Southland & Otago
Showers for Southland, thinning out in the afternoon with a few sunny spells breaking through, remaining showers clear evening. Strong westerlies. Otago has mostly sunny weather, some cloud possible in the afternoon especially near the coast as westerlies tend more southwest, (southwest winds become strong on the coast).
Highs: 15-19