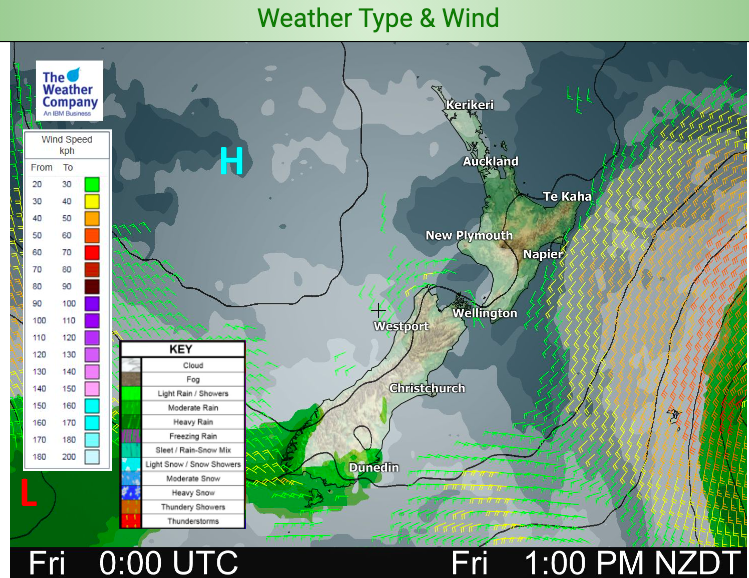 High pressure is increasing and milder winds are returning making for a dry end to the working week.

Temperatures will be above normal across the South Island today and tonight. In fact this afternoon some areas inland will again be over 8 degrees above normal.

Some rain arrives tonight in the south west corner – and on Saturday there will be a surge of wind and rain from a small low that moves in. Gales are possible in some exposed areas overnight/into Saturday.

Today winds are fairly light in many regions.

For more local details refer to your HOURLY forecast at WeatherWatch.co.nz or at www.RuralWeather.co.nz.

Northland, Auckland, Waikato & Bay Of Plenty
A little milder and mainly sunny – just a few cloudy spells in the west. Mostly sunny in Bay of Plenty and south Waikato all day. Winds mostly from the south to south west.
Highs: 19 – 23

Eastern North Island
A mix of sun and cloud but sunnier weather further north. Southerlies for many but westerlies kicking in around Wairarapa
Highs: 18-22

Wellington
Breezy to brisk northerlies with passing clouds.
High: 17 or 18

Marlborough & Nelson
A milder day with a mix of sun and cloud with variable wind directions.
Highs: 21 – 23

Canterbury
Coastal easterlies and inland west to nor west winds developing with a mix of sun and cloud.
Highs: 17-24

Southland & Otago
Often cloudy with showers in Southland, dry or mainly dry elsewhere. Coolest in coastal areas. Westerlies for the most part.
Highs: 14-24