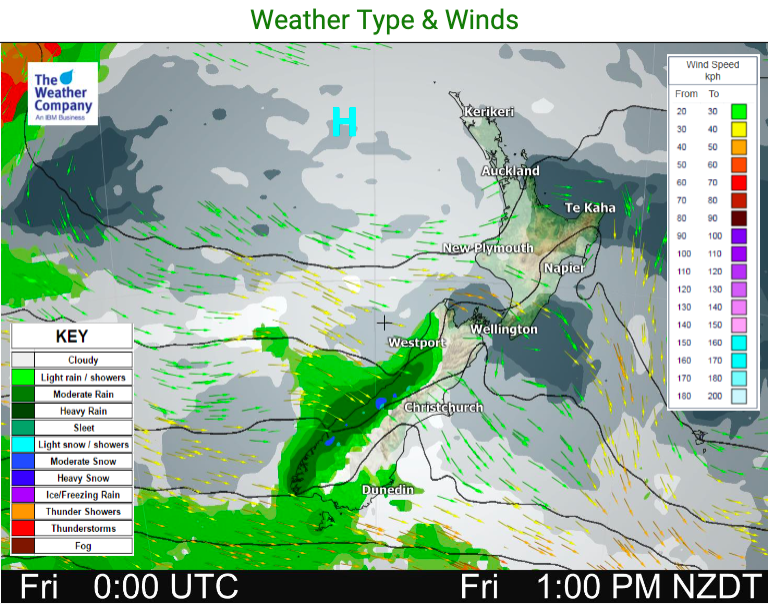 Cloudy weather spreads up the western side of NZ today with rain on the West Coast but mostly dry weather across the North Island due to high pressure centred just west of the Far North.

A storm in the Southern Ocean is slowly tracking south east away from NZ but the windy westerlies remain around some parts of the South Island and Cook Strait/Wellington area.

10 to 60mm falls along the West Coast, with totals increasing the further south yo go.

Southland has 2 to 10mm forecast for Friday with Otago receiving less than that.

Today will be average to slightly above average temperature-wise with nothing too extreme showing up.

High pressure in the upper North Island means lighter winds there for today compared to other days this week.

Here are the regional forecasts for Friday… and as always, to drill down deeper locally please see the HOURLY forecasts at either WeatherWatch or RuralWeather.co.nz.

Northland, Auckland, Waikato & Bay Of Plenty
Cool inland to the south to start with (King Country for example) then a mix of sun and cloud with west to south west winds. Cloudiest weather near the Tasman Sea.
Highs: 19-23

Wellington
A mix of sun and cloud with brisk North to North West winds.
High: 18

Canterbury
Cold overnight through the mountains and a cooler day in the high country with cloud – but further east high cloud and mostly sunny weather. Nor’west winds.
Highs: 14 – 25

Southland & Otago
Mostly Cloudy although may only be high cloud with sunny spells in some parts of Otago. A few showers in Southland. West to NW winds a little brisk in exposed areas.
Highs: 13-19