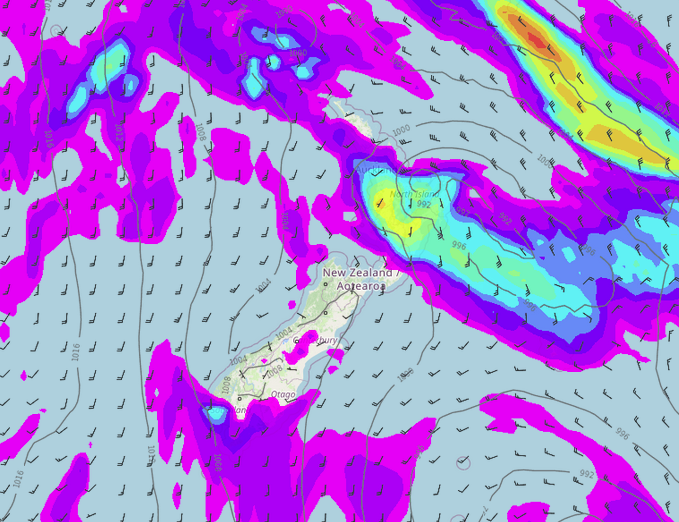 A low bringing heavy rain to the North Island this morning moves away to the east this afternoon, expect a southwesterly airflow further south.

Northland, Auckland, Waikato & Bay Of Plenty
Partly cloudy, the odd shower possible. Morning rain eases to showers then clears in the afternoon for Waikato and Bay Of Plenty. Some rain may pass over Northland in the afternoon. Overnight a few showers move in from the Tasman Sea. Southwesterly winds.
Highs: 13-16

Western North Island (including Central North Island)
Morning rain (snow to 900m about the Central Plateau), possibly heavy first thing then easing and clearing in the afternoon. Showers move back in in the evening as southeasterlies tend northwest.
Highs: 7-13

Eastern North Island
Morning rain, possibly heavy then easing to showers in the afternoon, clearing evening. A few showers may move back into Wairarapa overnight. Fresh southeasterlies tend southwest in the morning, dying out evening.
Highs: 10-14

Wellington
Mostly cloudy with the odd shower, it may dry out for a time in the afternoon. Fresh southerlies.
Highs: 10