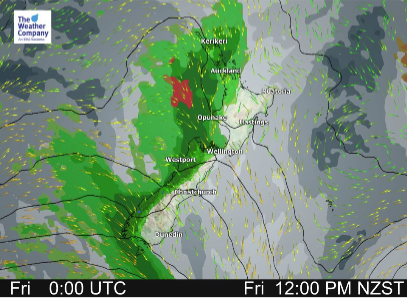 A frontal system brings rain or showers to western parts of the country today meanwhile it’s drier and sunnier in the east.

Southland could pick up rain or showers later this afternoon though then reaching Otago later this evening. Temperatures in the late teens or early twenties for most but in the mid teens for parts of the far south, West Coast and about the Central Plateau.

Northland, Auckland, Waikato & Bay Of Plenty
Increasing cloud, chance of a shower for Northland and Auckland. Rain sweeps down southeastwards over the upper North Island during the afternoon reaching Bay Of Plenty in the evening, easing overnight with a southwest change.
Highs: 20-21

Canterbury
Sunny areas and some high cloud, in the high country some scattered rain pushes northwards during the morning then easing and clearing in the afternoon. North to northwesterly winds.
Highs: 18-22

West Coast
A cloudy day with rain, easing to showers in the afternoon as northerlies change southwest. Rain moves back into Fiordland late afternoon then pushing northwards overnight.
Highs: 15-16