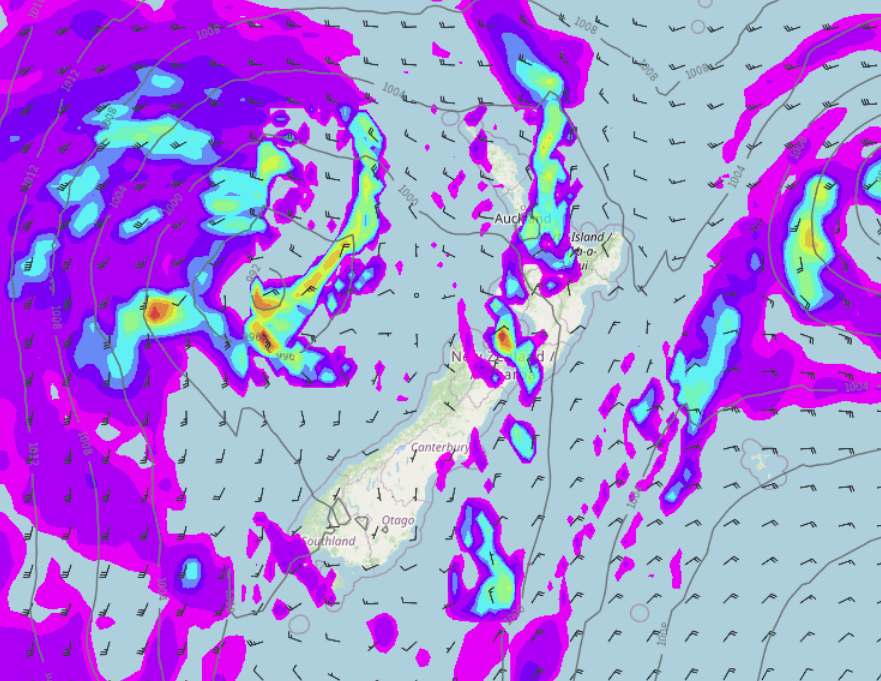 A front passes over New Zealand today moving in a west to east fashion.

Most regions see some rain or showers today at least for a time however the eastern North Island stays dry and part of North Canterbury may remain fairly dry.

Northland, Auckland, Waikato & Bay Of Plenty
Showers spread in from the west during the morning, perhaps a rogue isolated heavy shower around midday then easing from afternoon with sunny spells starting to break through as northerlies tend northwest.
Highs: 14-18

Western North Island (including Central North Island)
High cloud, some sun. Showers about Taranaki, perhaps a few isolated heavy falls in the afternoon as a front passes over then easing by evening. Showers may spread elsewhere for a time in the afternoon. Northerly quarter winds.
Highs: 11-16

Marlborough & Nelson
Mostly cloudy, some scattered rain moves into Nelson during the morning then Marlborough around midday. Northerly quarter winds die away by evening.
Highs: 13-14

Canterbury
Mostly cloudy with southwesterlies developing in the morning, showers develop by midday. Parts of North Canterbury may stay fairly dry for most of today.
Highs: 8-11

West Coast
Rain about Fiordland clears up by midday, plenty of high cloud hangs about though. Further north skies are mostly cloudy, expect a mix of showers and dry spells, perhaps some rain for a time. Winds are mostly variable, tending southeast about South Westland.
Highs: 11-13

Southland & Otago
Some morning rain then easing to the odd shower in the afternoon as light winds tend south to southwest. A few afternoon sunny spells possible for Southland. Coastal Otago may not see showers till late morning.
Highs: 7-11