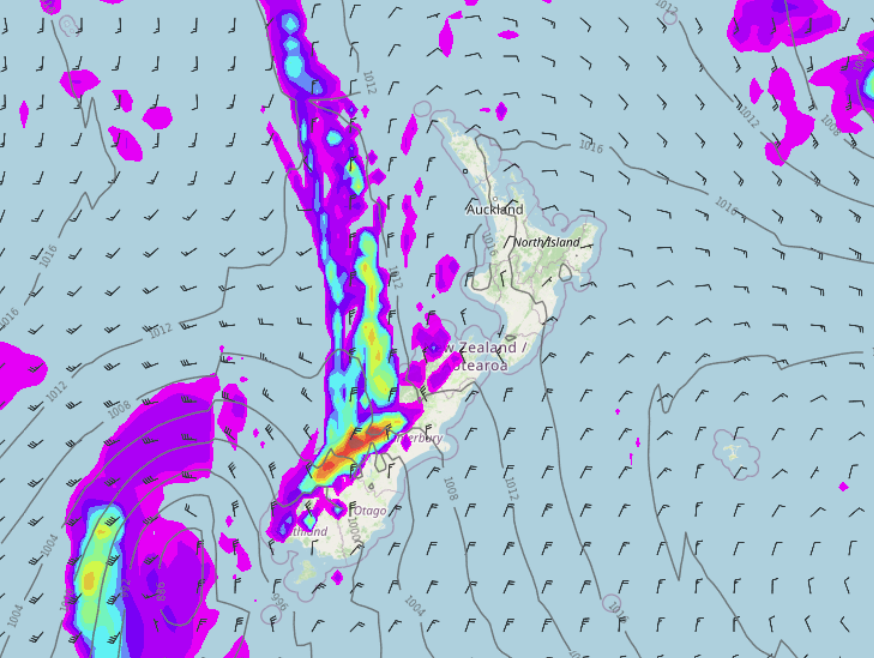 A front pushes over the South Island today from the west bringing rain in the west and warm weather out east, the North Island is still mainly settled with a ridge of high pressure.

Northland, Auckland, Waikato & Bay Of Plenty
Morning cloud, perhaps some fog inland, there may be a light shower then sunny areas increase from afternoon. East to northeasterly winds.
Highs: 23-25

Wellington
A mix of sun and cloud, a spit or shower possible around midday. Blustery north to northwesterly winds.
Highs: 21-24

Marlborough & Nelson
Mainly sunny, some cloud builds about Nelson and the Sounds in the morning however with light showers from midday, high cloud from late afternoon about eastern Marlborough. North to northwesterly winds becoming a little blustery after midday.
Highs: 23-25

Canterbury
Mostly sunny with some high cloud from afternoon, chance spot of rain in the evening. Northerly winds pick up after midday.
Highs: 24-28

West Coast
Cloudy with rain about South Westland spreading into North Westland in the afternoon as a front moves through, northerlies change to the west behind the front then rain eases back to showers. In the evening showers beef up a little for Fiordland.
Highs: 21-22

Southland & Otago
A mix of mid and high level cloud, a few spits of rain possible around midday for Southland and inland areas. North to northeasterly winds.
Highs: 23-25