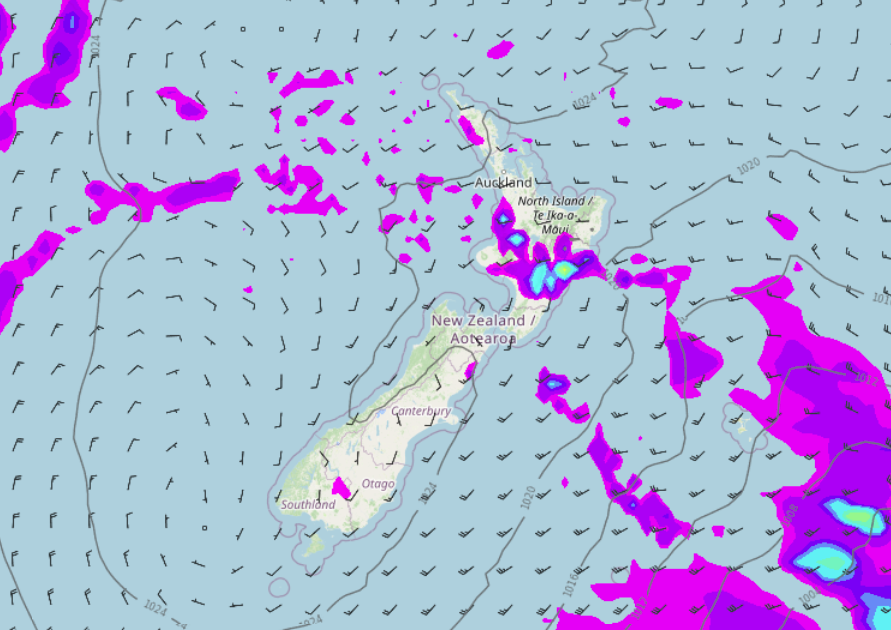 A cold front pushes northwards over New Zealand today but it does weaken as it moves northwards, later today as southwesterlies ease over the South Island a high pressure system in the Tasman Sea starts to move in.

Northland, Auckland, Waikato & Bay Of Plenty
A mix of sun and cloud, the odd shower now and then mainly out west. Southwesterlies tend to the south around midnight.
Highs: 16-18

Western North Island (including Central North Island)
Increasing cloud with northwesterlies, the odd shower, becoming widespread around midday for a time as a southerly change pushes in. Showers ease afternoon then clear by evening. Snow flurries may lower to 700m before clearing.
Highs: 10-16

Eastern North Island
Sunny, southwesterlies push through Wairarapa late morning then further north in the afternoon with a few showers. Showers clear from the south evening onwards. A few snow flurries may get down to 700 or 600m at a push before clearing.
Highs: 13-18

Marlborough & Nelson
Dry at first, some sun for Nelson. A southerly change mid morning brings a few showers for Marlborough then clearing in the afternoon. Nelson has cloud thicken from afternoon bringing in the risk of a shower, any of which clear evening.
Highs: 11-14

Canterbury
Showers, easing in the afternoon becoming few, any remaining showers clear by evening. Snow flurries to 500, maybe 400m at a push. Southwesterlies, fresh about the coast, die out in the evening.
Highs: 9-11

West Coast
Mostly sunny about South Westland, a few showers about North Westland (snow flurries to 700m) then clearing by midday, sun breaks through from afternoon. Southwesterlies ease dying out in the evening.
Highs: 9-13

Southland & Otago
Morning showers and snow flurries to 400m then sunny spells increase from afternoon, showers may not clear about coastal Otago till late afternoon. Southwesterlies die out in the evening.
Highs: 8-9