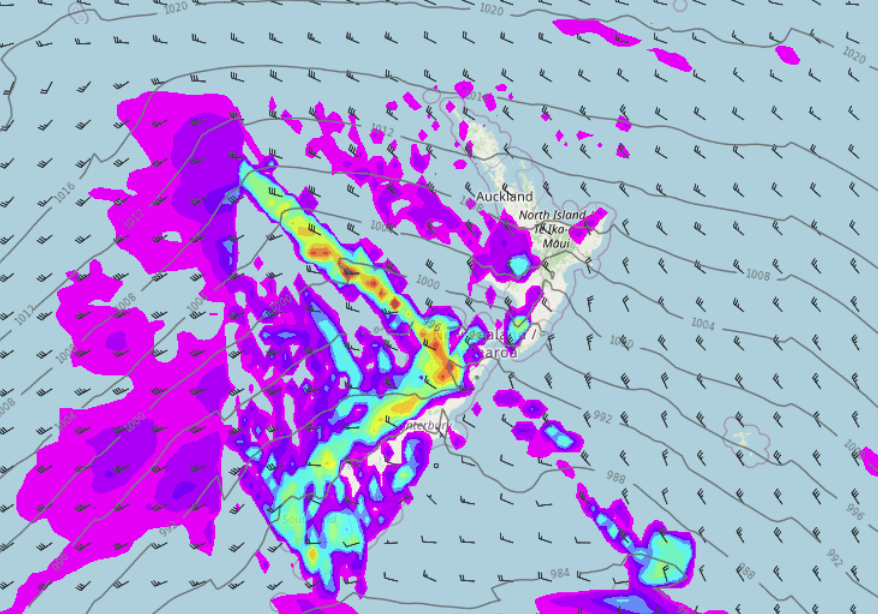 A cold front moves northwards over the South Island today, reaching the North Island this evening. Expect heavy rain in the west as this front moves through, strong northwesterlies in the east ahead of the front.

Northland, Auckland, Waikato & Bay Of Plenty
Mostly cloudy with the odd shower, rain develops in the evening then easing back to showers overnight as gusty strong northwesterlies change southwest. Towards dawn on Saturday showers may be heavy with thunderstorms and hail.
Highs: 17-19

Western North Island (including Central North Island)
Mostly cloudy with a few showers, turning to rain in the afternoon. Rain changes back to showers overnight but showers could become heavy with thunderstorms and hail. Snow to 700m overnight about the Central Plateau. Strong northwesterly winds change southwest overnight.
Highs: 11-17

Eastern North Island
High cloud, some sun. Gusty northwesterlies, strong to gale force about Wairarapa. Wairarapa sees a few spits of rain in the afternoon then spreading northwards during the evening.
Highs: 18-22

Wellington
Mostly cloudy with a few showers, some rain for a time in the evening. Gale to severe gale northwesterly winds.
Highs: 15-16

Canterbury
Morning rain, heavy inland. Strong northwesterlies especially for North Canterbury with severe gales possible, winds change to the south in the afternoon with showers moving in. Showers becoming heavy for South and Mid Canterbury, perhaps some thunder / hail too then moving into North Canterbury in the evening. Snow may lower to 700m overnight.
Highs: 14-17

West Coast
Heavy rain then afternoon showers, showers heavy with thunderstorms and hail about South Westland then spreading into North Westland by evening. Strong northwesterlies change brisk southwest as rain eases to showers. Snow may lower to about 700m in the evening for a time.
Highs: 11-14

Southland & Otago
Showers, there may be a few isolated heavy falls with some hail and thunder in the afternoon then easing this evening, snow lowers to 600m later in the day. Sun may even break through for a time around midday. Westerlies tend southwest.
Highs: 10-14