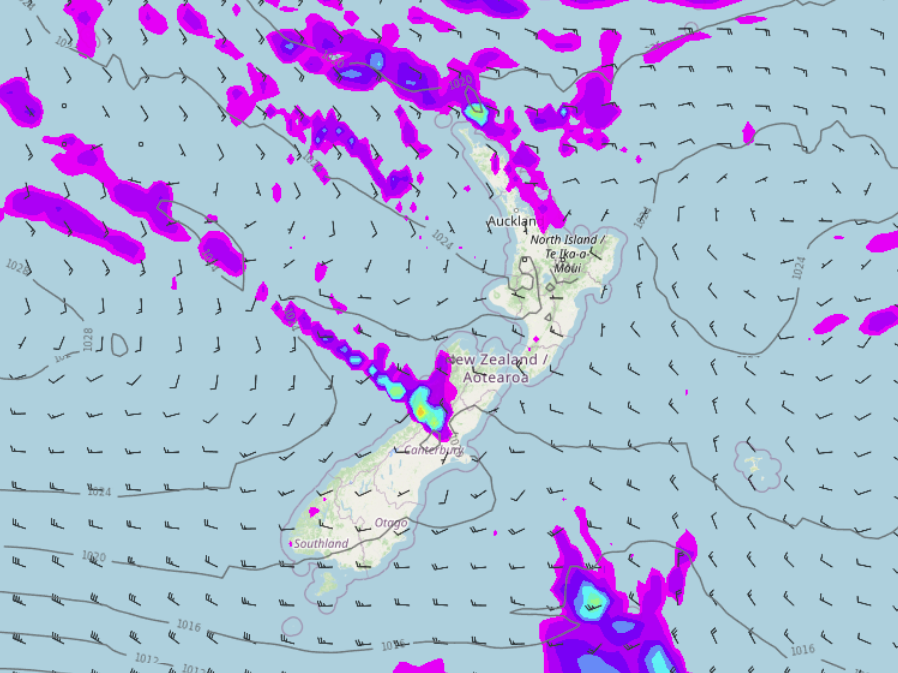 A cold front pushes northwards over the South Island today meanwhile the North Island is under a thin ridge of high pressure.

Some rain for the West Coast and about the far south of the South Island today, a few showers spread into Canterbury this afternoon with a southerly change. Most of the North Island is dry but there could be a shower or two north of about Auckland.

Northland, Auckland, Waikato & Bay Of Plenty
Partly cloudy, chance of a shower or two north of Auckland. Some high cloud spreading in from the north in the evening. South to southwesterly winds.
Highs: 17-20

Eastern North Island
Sunny with light northwesterlies, perhaps a little breezy about Wairarapa. In the afternoon winds tend to the east for Hawkes Bay. Overnight cloud develops with a few showers as winds tend to the south.
Highs: 18-21

Canterbury
Some morning sun and developing high cloud, an afternoon southerly change brings showers then clearing up in the evening.
Highs: 14-18

Southland & Otago
Morning rain with a gusty west to southwest change, easing to showers by midday then clearing evening, sunny spells start to break through from afternoon. West to southwesterly winds ease later in the day.
Highs: 12-13