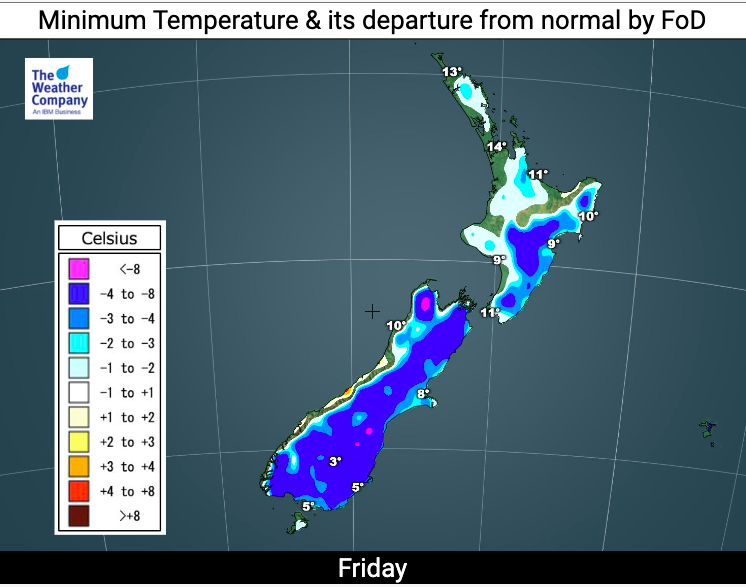 A light frost is possible overnight tonight in parts of the South Island’s interior as a colder than usual southerly for this time of the year heads up the nation.

Today will have below average temperatures in Southland, Otago and the southern half of Canterbury.

By tonight the overnight lows will be below normal in across about 80% of New Zealand.

The southerly change is short lived but will bring some wet weather into dry parts of Canterbury, Otago.

Northern NZ has a drier day.

Winds will be picking up again from the south west.

Northland, Auckland, Waikato & Bay Of Plenty
West to SW winds, a little brisk later through Auckland and some coastal areas. A dry mild day though with just a few passing clouds in the west, sunniest in the east.
Highs: 20-25

Western North Island (including Central North Island)
A little windy with westerlies and passing clouds. Mostly dry but might be a shower.
Highs: 18 – 20

Wellington
A mix of sun and cloud with mild northerlies. However a stronger southerly arrives end of the day bringing showers and a temperature drop.
High: 19 – 21

Canterbury
South to south west winds developing for many with showers moving up the region, clearing later. Showers may turn to a period of rain in North Canterbury later in the day.
Highs: 14-22