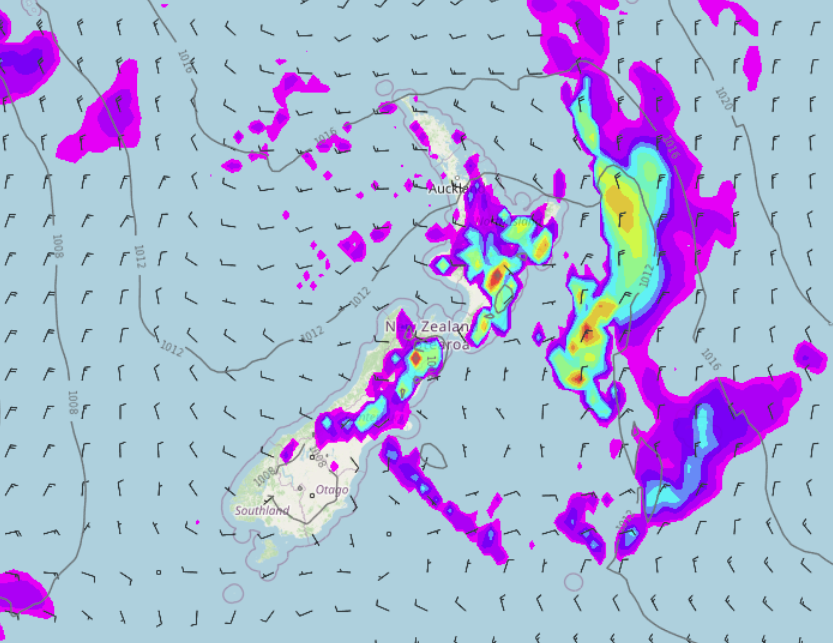 A broad low pressure system moves over New Zealand today coming in from the Tasman Sea, showers for many regions with thunderstorms this afternoon for many North Island regions and potentially Nelson / Marlborough.

Northland, Auckland, Waikato & Bay Of Plenty
Showers and a few sunny spells, chance of a heavy fall / thunderstorm in the afternoon south of about Auckland then clearing in the evening. The odd shower may remain out west overnight. Northwesterlies tend to the west after midday.
Highs: 18-20

Western North Island (including Central North Island)
Morning sunny spells, chance of a shower. Showers becoming more widespread in the afternoon, some may be heavy with thunderstorms inland then clearing later in the evening. West to northwesterly winds.
Highs: 15-19

Eastern North Island
A dry morning with some sun, showers north of Mahia Peninsula. In the afternoon showers becoming a bit more widespread, some may become heavy with thunderstorms then clearing later in the evening. Light winds.
Highs: 20-22

Wellington
Morning showers or drizzle then cloud breaks to sun in the afternoon, north to northwesterly winds.
Highs: 17-20

Canterbury
Mostly cloudy, the odd light shower or drizzle patch. Sun may break through in the afternoon. Light southwesterlies.
Highs: 17-22