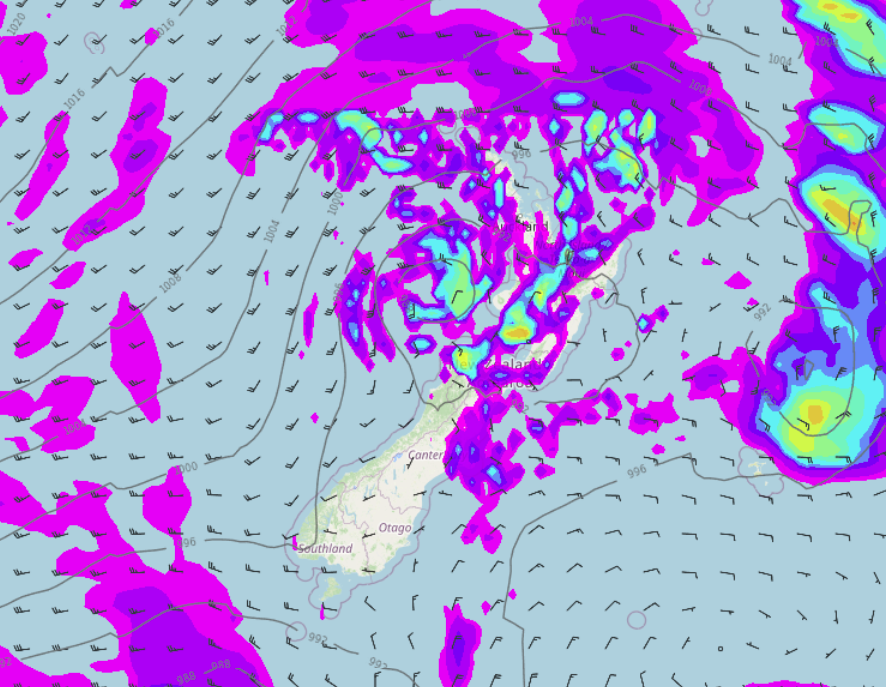 An area of low pressure brings some unstable weather to the western North Island today, also showers or rain to the top of the South Island. The lower South Island is dry and mainly settled but a cold front moves into the far south overnight bringing further showers.

Western North Island (including Central North Island)
Showers, chance of an isolated heavy fall / thunderstorm (mainly about Taranaki). Northerlies tend northwest in the afternoon. Showers clear at night for most but a few may remain near the coast.
Highs: 11-15

Eastern North Island
Some sun and high cloud, perhaps a few showers or spits about Wairarapa. In the evening light winds change southwest bringing a few showers to most.
Highs: 15-17

Wellington
Showers, clearing in the evening. Northerlies change to the south in the afternoon.
Highs: 13-14

Marlborough & Nelson
Early rain eases to showers, clearing in the evening. Light winds tend to the south by midday.
Highs: 12-14

Canterbury
Showers, mainly north of about Banks Peninsula clear in the afternoon although one or two showers may hang about the coast till evening. Morning cloud elsewhere, sun breaks through in the afternoon for all. Light southwesterlies.
Highs: 10-12

West Coast
Mostly sunny after any morning cloud clears for South Westland, a few showers further northwards clear in the morning then sun breaks through there. Southerly quarter winds. Overnight showers move back into Fiordland.
Highs: 12-15

Southland & Otago
Morning cloud breaks to mostly sunny weather, perhaps a morning shower for coastal Otago and the Catlins then clearing away. Overnight showers for Southland as light winds change to the west.
Highs: 10-12