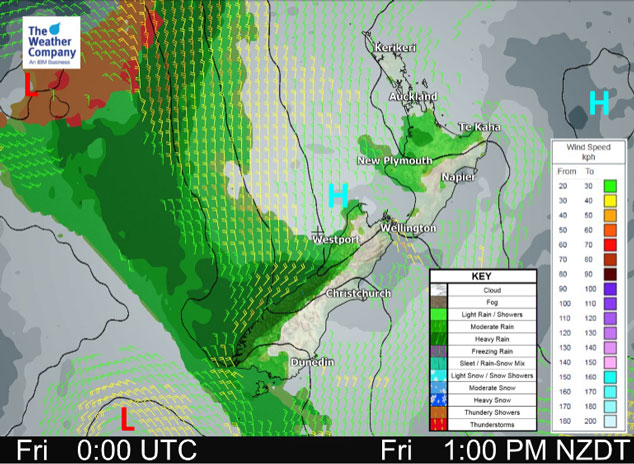 A northerly airflow lies over New Zealand today, a few showers or some rain in the west. Mainly dry out east but a few areas of scattered rain spread into the far south this afternoon.

Northland, Auckland, Waikato & Bay Of Plenty
Mostly cloudy, a few afternoon sunny spells for Northland and Auckland. Some morning fog possible for the Waikato. Risk of a few afternoon showers, especially about Waikato and inland Bay Of Plenty then clearing in the evening. North to northeasterly winds.
Highs: 19-22

Western North Island (including Central North Island)
Morning low cloud or fog breaks to sunny spells, a few isolated showers develop in the afternoon, clearing later in the evening although the odd one may hang about New Plymouth through the night. North to northwesterly winds.
Highs: 19-22

Marlborough & Nelson
Morning mid level cloud breaks away to some sun, expect some high cloud however. North to northwesterly winds pick up from afternoon.
Highs: 19-23

Canterbury
Morning cloud breaks to sunny areas and some high cloud in the afternoon as northeasterlies tend northwest. Becoming warm. A few spots of rain possible about South Canterbury in the afternoon, clearing evening.
Highs: 22-26

Southland & Otago
Mostly cloudy, some rain develops in the afternoon, more so about Southland but the odd spot possible for Otago. Rain clears away during the evening. North to northeasterly winds.
Highs: 19-24