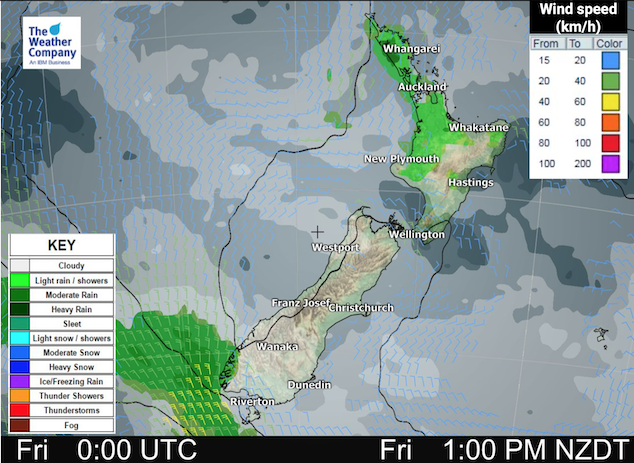 Mainly anticyclonic today bringing mainly settled weather, this is very much true for the South Island. The North Island sees a few showers in certain regions, some of these may become heavy in the afternoon with the chance of a thunderstorm.

Northland, Auckland, Waikato & Bay Of Plenty
Cloudy areas, isolated showers too mainly in the afternoon with the chance of a heavy fall (hills / ranges will be a good spot for these). Risk of a thunderstorm in the afternoon also mainly about inland Northland and Waikato but the outside chance one may occur elsewhere. Light northeasterly winds.
Highs: 18-21

Western North Island (including Central North Island)
Mainly clear to start for most although there may be some fog first thing in the morning. Showers move into Taranaki during the morning then a few isolated showers spreading elsewhere during the afternoon, mainly inland about hills / ranges. Showers clear away in the evening. Light northerlies.
Highs: 18-20

Eastern North Island
Mostly sunny, some cloud builds in the afternoon, especially about the ranges where a few isolated showers get going. A few of these showers may turn heavy / thundery then easing in the evening. Generally dry right on the coast but in the evening a few showers may spread from the ranges for a time. Light winds.
Highs: 21-24

West Coast
Mostly sunny, some high cloud. Some fog possible about Buller to start then clearing with a warm afternoon in store. Light winds tend west to southwest in the afternoon.
Highs: 15-20