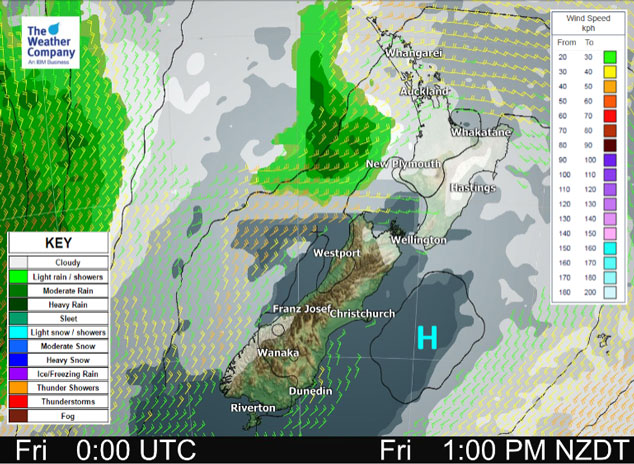 An anticyclone sits to the east of the country today, a northeasterly airflow moving around this high flows over New Zealand.

Western North Island (including Central North Island)
A mix of sun and cloud for most. Taranaki has morning showers, sun may break through from afternoon but possibly not till evening before dusk. Easterly quarter winds.
Highs: 13-15

Wellington
Mostly sunny, there may be some morning cloud about the southern coast. Light southeasterly winds. A cold start for Upper Hutt but with the warmest afternoon.
High: 14-16

Marlborough & Nelson
Any morning cloud clears then mostly sunny, perhaps a frosty start inland away from the coast. Some afternoon cloud may hang about the ranges. Light winds tend east to northeast in the afternoon.
Highs: 14-16

Canterbury
Sunny, light winds inland with a frosty start. Some afternoon cloud inland about the ranges may bring late afternoon / evening isolated showers. Easterly winds freshen in the afternoon for the plains and especially near the coast.
Highs: 13-16

West Coast
Any early cloud clears then mostly sunny, a cold start inland away from the coast. Afternoon cloud about the ranges may bring a few isolated showers late afternoon / evening. Light winds tend north to northwest in the afternoon.
Highs: 15-18

Southland & Otago
Sunny after a frosty start. Light northeasterlies for most but about coastal Otago east to northeasterly winds freshen up during the afternoon where the coolest day time highs will be experienced.
Highs: 13-18