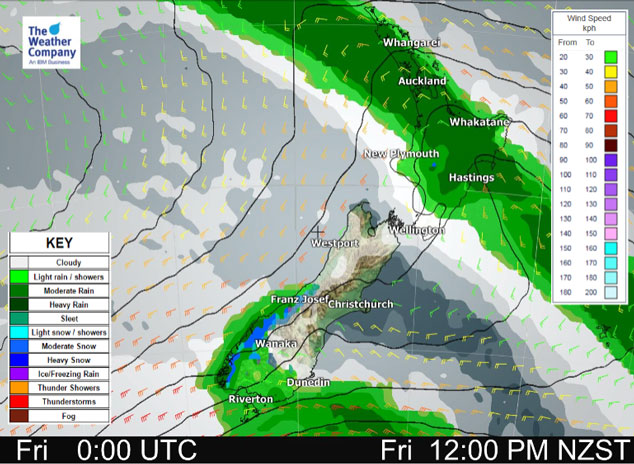 Northland, Auckland, Waikato & Bay Of Plenty
Cloudy with a shower or two for western Auckland and Waikato then expect rain late morning for all regions as northwesterlies change fresh southwest. Rain quickly eases back to showers in the afternoon with some sun starting to break through, showers clear away in the evening.
Highs: 15-17

Eastern North Island
Rain about Wairarapa spreads into Hawkes Bay in the morning then Gisborne by midday with a cool southwest change, rain eases during the afternoon then clearing evening. Rain may be heavy in the morning about Wairarapa before easing. Dry and warm with high cloud before rain moves in. A chance of some sun late in the day before dusk.
Highs: 17-19

Canterbury
Morning showers (rain about North Canterbury) with snow to 400m clears then becoming sunny with southwesterly winds dying out in the morning. Winds tend northwest in the afternoon then later in the evening a southwest flick moves northwards about coastal parts bringing some cloud.
Highs: 12-16