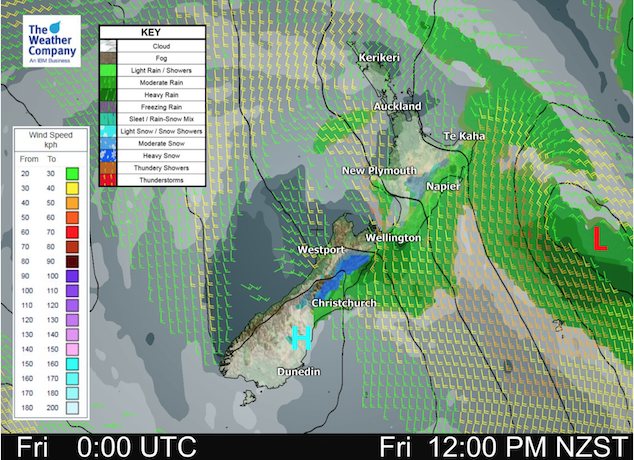 A ridge pushes onto the South Island today with cold southerly quarter winds easing. The North Island has a wet day in the east, the odd shower out west in a southerly airflow.

Northland, Auckland, Waikato & Bay Of Plenty
Mostly sunny, any early showers clear Auckland. The odd shower for Northland clears around midday then sunny areas increase. There may be an isolated shower from mid to late afternoon, possibly heavy with hail / thunder then clearing later on. Heavy showers if they do occur will likely be about western Waikato, western Bay Of Plenty and western Auckland / Coromandel. Southwesterlies tend to the south during the morning.
Highs: 15-16

Western North Island (including Central North Island)
Occasional showers, perhaps an isolated heavy fall in the afternoon with some small hail then easing and clearing in the evening. Snow to 600m. Sun breaks through at times near the western coastline from afternoon. Breezy south to southeasterly winds, strong about the coast, easing later in the day.
Highs: 10-13

Eastern North Island
Showers, picking up from afternoon with a chance of heavy falls and small hail then easing overnight. Snow flurries to 600m. South to southwesterly winds, fresh about the coast.
Highs: 12-13

Canterbury
Showers ease, clearing in the afternoon. Snow flurries to 400m. Sun breaks through at times from midday. Cold southwesterlies die out in the evening.
Highs: 8-10

Southland & Otago
Morning cloud, risk of a shower then breaking to mostly sunny weather in the afternoon. Southwesterlies die out around midday, northeasterlies by evening about coastal Otago.
Highs: 10-11