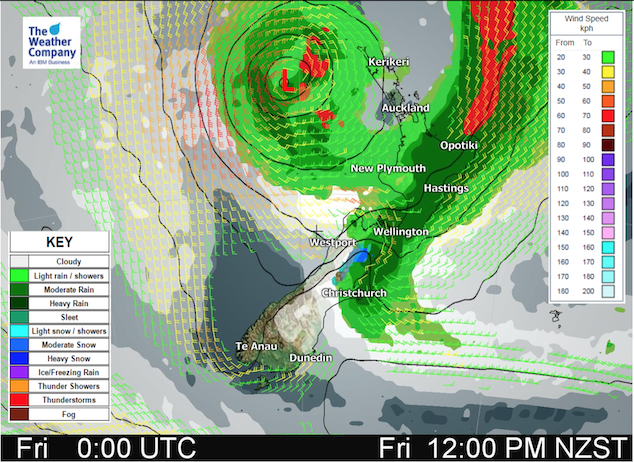 A low pressure centre west of the North Island drags an easterly quarter airflow over the country today, generally unsettled for the upper South Island and North Island.

Northland, Auckland, Waikato & Bay Of Plenty
A mix of sun and cloud about Northland and Auckland, perhaps even a few areas of fog to start. The odd isolated shower moves into Northland from afternoon. Waikato and Bay Of Plenty sees showers, turning to rain in the evening (heavy about BOP) then easing overnight. Northeasterly winds.
Highs: 15-17

Western North Island (including Central North Island)
Rain, easing south of Taranaki from afternoon. Taranaki may see rain pick up for a time in the evening then easing overnight. Southeasterly winds.
Highs: 12-16

Marlborough & Nelson
Rain with heavy falls about Marlborough, easing from afternoon to just the odd shower by evening. Rain for Nelson eases, clearing in the evening. Southerly winds.
Highs: 13-15

Canterbury
A mostly cloudy day for Canterbury, over into the Mackenzie Basin expect a frosty start with a mix of sun and cloud. Showers Mid Canterbury northwards clear late afternoon, rain about Banks Peninsula and the Kaikoura coast (possibly heavy about the Kaikoura coast) eases from afternoon. Cold south to southwesterly winds.
Highs: 6-11

West Coast
Mostly sunny, some cloud at times Greymouth northwards. A few showers may pass into Buller at times also from the east then clearing by evening. Southeasterly winds. A frosty start for Fiordland.
Highs: 12-15

Southland & Otago
Sunny after a frosty start (Southland / inland areas), there may be some cloud at times for Otago especially morning and night. Easterlies.
Highs: 6-10