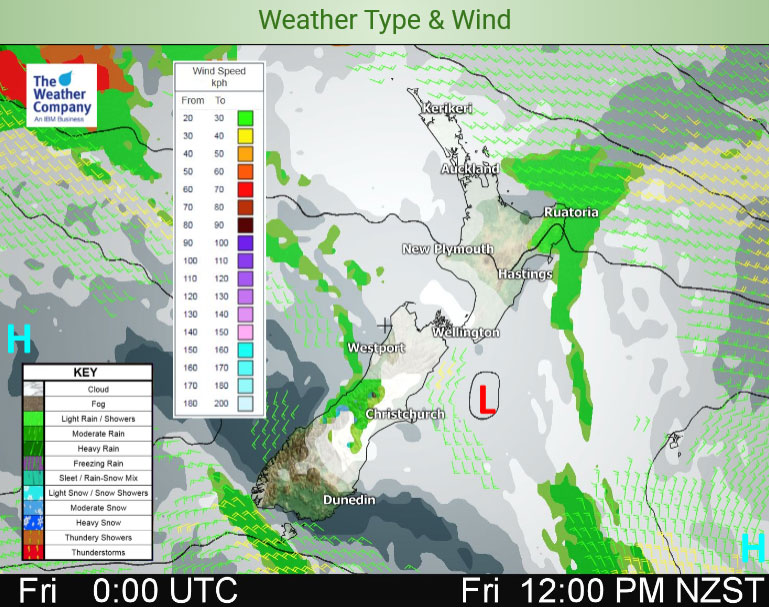 A band of high pressure lies across New Zealand today bringing mainly settled conditions, some regions may not be cloud free however and expect the odd shower for some places too.

Northland, Auckland, Waikato & Bay Of Plenty
Cloudy areas for Northland and Auckland, a shower or two also mainly about exposed eastern spots like Coromandel, Great Barrier Island, northern Auckland and eastern Northland etc although the odd brief shower may spread into other parts at times. Waikato and Bay Of Plenty have a mix of sun and cloud. East to southeasterly winds.
Highs: 16-20

Western North Island (including Central North Island)
Sunny areas and some high cloud, light winds tend to the south in the afternoon.
Highs: 14-18

Marlborough & Nelson
High cloud, breaking away in the evening. Some mid level cloud may build up a little about inland ranges from afternoon pushing in from the south. Afternoon easterly winds.
Highs: 13-16

West Coast
For most of the West Coast morning cloud may bring a shower then sunny areas increase from afternoon, light winds. A cold start for Fiordland with frosts possible then mostly sunny, evening cloud bring a shower or two in the south.
Highs: 14-17