Friday and the weekend 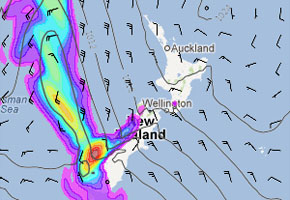 Friday is still looking as mentioned yesterday, fine and sunny weather over the North Island with north to northeasterly winds picking up later in the day with some cloud in the west. On the east coast expect sunny skies all day with light winds. Fine out east in the South Island with high cloud and increasing north to northwesterly winds bringing mild temperatures. A few brief showers get into Southland and perhaps Otago later in the day as winds ease. Expect rain on the West Coast.

On Saturday skies will be mostly cloudy over the North Island with brisk northerly winds, rain develops in the west during the morning then clears later in the day as winds change westerly. Fine out east with high cloud and breezy northwesterlies, showers later at night as winds change more southerly. Fine on the east coast of the South Island with high cloud, a southwest change moves through from afternoon in Otago through to Marlborough at night bringing a period of showers. Another period of showers moves up the West Coast also and there could be a few thundery falls in the mix.

On Sunday skies will have sunny areas and some cloud over the North Island with a few showers on the east coast with southerlies. In the afternoon and evening isolated showers may pop up south of Auckland and through many inland areas bringing a risk of thunder. Any morning showers clear in the South Island with sunny breaks then increasing as southwesterlies ease. Perhaps the low risk of an isolated afternoon shower about Marlborough and inland areas of North Canterbury about hills and ranges.