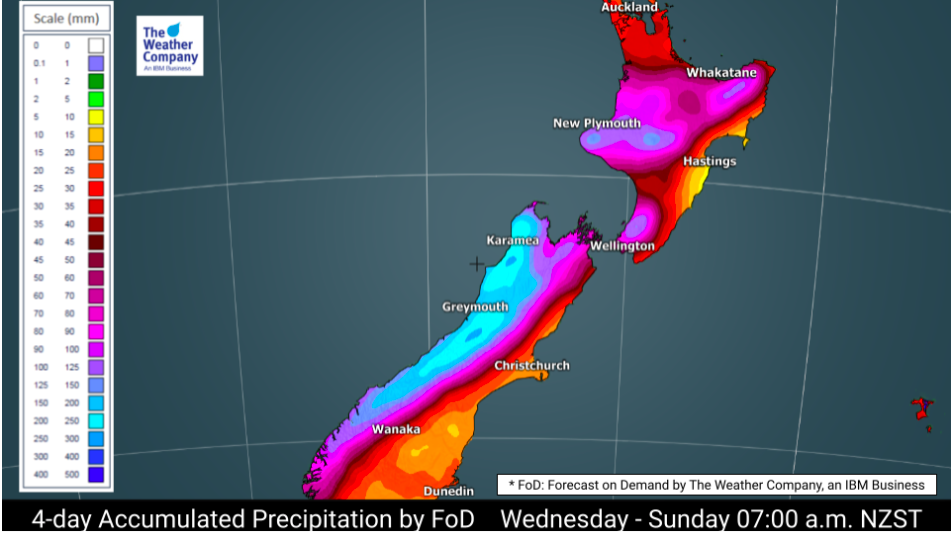 Day after day of heavy rain will impact the West Coast and this time it’s more focused on populated areas to the north, rather than Fiordland to the south.

Latest rainfall estimates by WeatherWatch and IBM Watson suggest over 300mm is possible in the ranges over a four day period, starting later on Wednesday, in the upper half of the West Coast.

Rainfall totals at RuralWeather.co.nz show some big numbers at sea level too, with Westport expecting almost 250mm over four days.

This sort of rain is heavy enough to lead to slips, flooding and road closures but one positive is that it is spread out over four days, with Friday/Saturday looking the wettest.

The upper north west part of the South Island (from Westport to the Nelson Ranges) looks to take the bulk of the rain, but surrounding areas such as Arthur’s Pass, Nelson and Taranaki all look to get some big rainfall totals too.

For the most accurate rainfall forecast data in NZ, please see our HOURLY and DAILY rainfall totals, powered by IBM Watson, at both WeatherWatch and RuralWeather.co.nz.