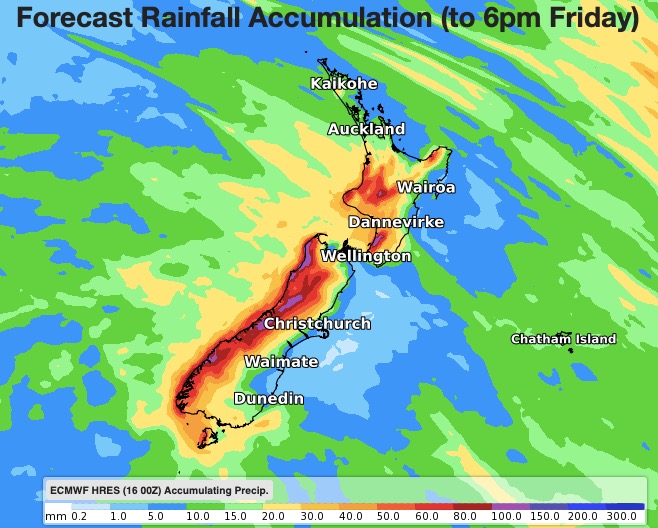 New Zealand’s weather is being driven by a westerly flow lately, meaning the bulk of our rain is falling in the west, especially in the South Island. A front today is doing just that – it’s quite narrow and is falling apart as it heads northwards, but might have a couple isolated heavier falls in the very west.

Windy to gale force westerlies move northwards with western showers and rain today – while eastern areas are fairly mild and mostly dry as those winds blow.

This off and on wet set up is bringing some relief to dry northern NZ (despite it being showery most days many regions in the north still remain in a significant rainfall deficit over the past three and half years).

Perhaps most unfortunate about the current westerly flow is that it’s giving Hawke’s Bay a poor end to winter rainfall-wise. The region started 2021 exceptionally dry and despite one wet month in the mix, this year it’s mostly been much drier than average.

“Hawkes Bay is incredibly dry, I have never seen anything like it in mid August, farming friends are buying in water, streams are dry and the main rivers are close to crisis point. If you look south all the north facing country is starting to brown off” wrote ‘Andrewj’ on our YouTube page yesterday, following our latest weather video update.

A number of farmers have told WeatherWatch.co.nz over recent weeks that rain is desperately needed with small lakes/ponds drying up across Hawke’s Bay farms. With spring just around the corner this weather pattern will be concerning for some due to the usual increase in drier, westerly, airflows from September to December.

However all hope is not yet lost – this time of year produces frequent fronts from the west which can gradually accumulate rainfall in the east. Brief southerlies are also quite likely to bring in some wet weather to the north of the region in the months ahead. But it’s fair to say the next two weeks ahead don’t look very wet and that those in Hawke’s Bay needing rain will have to wait to spring for the next better chance for it arriving – and that may not give many the optimism they want.