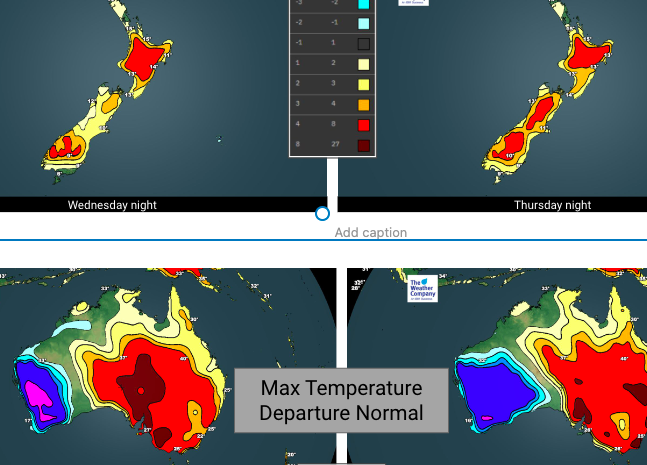 While some coastal areas do have a cooler sea breeze, many places inland are warmer than usual.

The mild run of weather continues on this week even as a low in the Tasman Sea moves through – then falls apart.

The next pulse of colder air is this weekend, with Invercargill shifting from a high of 21C on Saturday to just 11C on Sunday. Alexandra goes from a high of +22C on Friday to +14C by Sunday. For many, the cooler Sunday/Monday change will only reset temperatures back to normal for this time of year.

AUSTRALIA
Aussie is split down the middle at the moment with a warmer than average northerly flow on the eastern side and a much cooler southerly flow on the western side. Perth has a high of only 17C today whereas Adelaide may reach 30C.

Friday and Saturday will see a big cool down move into south eastern Australia – and as far north as Sydney. Sydney’s high on Friday is +31 to 33C, but by Saturday it will be down to highs of 18 to 22 across the city.

Melbourne also has a cold change coming, with a maximum of 26C on Thursday but a high of only 16C for Friday and Saturday.

Spring temperature ups and downs continue into early November too, for both New Zealand and the southern half of Australia – although some settling high pressure may bring in more consistent temperatures for a time.

To drill down deeper in NZ please see the Temperature Tab at www.RuralWeather.co.nz