Home > News > Flood Risks for northern NZ this long we... 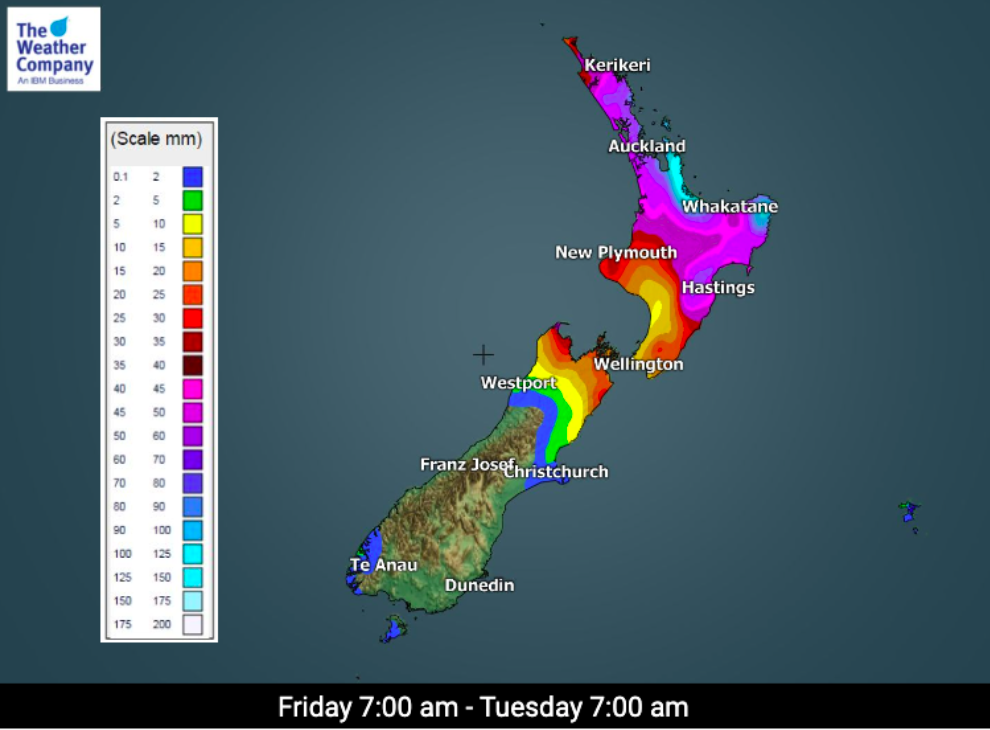 It’s not often we blame a high pressure system for the chance of flooding but this weekend that may be the set up.

High pressure – which is currently over the South Island – will expand east of New Zealand this weekend, pulling down a very sub-tropical moisture-rich airflow which will then, in turn, be slow moving due to the high “It’s a bit like this rain band is building up behind a slow moving truck that it can’t over take” says WeatherWatch.co.nz head forecaster Philip Duncan. “Like slow traffic the rain bands will get longer behind this slow moving high, ensuring some regions get saturated”.

Following on from a drought heavy rain can increase the risks of slips and flooding.

WeatherWatch.co.nz, using IBM Watson (the most powerful weather super computer used in New Zealand), estimates 125 to 150mm possible in the ranges of Coromandel Peninsula. “It the rain bands taken any longer to move through these numbers could actually increase” says Mr Duncan.

This narrow but heavy sub-tropical flow will feed into eastern Northland, northern Auckland, eastern Coromandel Peninsula, western Bay of Plenty and then spreads out east across the rest of Bay of Plenty, East Cape, Gisborne and maybe even Hawke’s Bay.

Around the outer edges of this system the rain may be more patchy with long dry spells, drizzly areas and even the odd sunny spell.

Some good rain is expected in the Auckland water catchment dams.

To drill down locally use our hourly and daily rainfall totals and risks in your local WeatherWatch.co.nz forecast or at RuralWeather.co.nz.

“With the exception of the extreme rainfall numbers in some places this rain event is precisely what farmers and growers in the dry north and east have been wanting for months – but it’s worth noting not everyone will get a soaking, with the bulk of the rain hugging the eastern coastline from Whangarei to Napier, those further west have much lower totals”

Rain won’t penetrate south of Banks Peninsula on the eastern side of the South Island, or about Greymouth on the western side.

Good rain coming, might be a bit late for the farmers, hopefully there will be good moisture for spring growth

What about waiheke island, will we get the big soak, or just a drizzle?