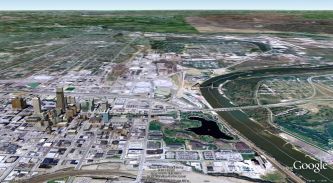 A water-filled berm protecting a nuclear power plant in Nebraska from rising floodwaters collapsed Monday NZT, according to a spokesman, who said the plant remains secure.

Some sort of machinery came in contact with the berm, puncturing it and causing the berm to deflate, said Mike Jones, a spokesman for the Omaha Public Power District (OPPD), which owns the Fort Calhoun plant.

The plant, located about 30kms north of Omaha (the State’s largest city with a population of 1.2 million), has been shut since April for refueling.

“The plant is still protected. This was an additional, a secondary, level of protection that we had put up,” Jones said. “The plant remains protected to the level it would have been if the aqua berm had not been added.”

Parts of the grounds are already under water as the swollen Missouri River overflows its banks, including areas around some auxiliary buildings, Jones said.

In addition to the berm, authorities have put in place floodgates and other barriers to help protect the facility, like sandbags.

The 2.4-metre-tall, water-filled berm, 5 metres wide at its base, surrounded the reactor containment structure and auxiliary buildings, according to the Nuclear Regulatory Commission.

“We built the plant up high enough based on history, based on the flooding in the past. If the flood would rise for some reason above that level we have taken precautions, again, per our procedures to sandbag the important equipment for the reactors,” said Dave Van Der Kamp, with the NRC.

He said the chances of floodwater getting into the building where the core is kept are almost zero.

The plant is designed to withstand waters up to 309 metres above mean sea level, according to the OPPD. The river currently stands at 307 metres and is not expected to exceed 309 metres feet, the Power District said.

Heavy rainfall in Montana and North Dakota, combined with melting snow from the Rocky Mountains, have sent the Missouri surging downstream this summer. The river washed over and punched through levees in nearby northwestern Missouri, spurring authorities to urge about 250 nearby residents to leave their homes.

The 150mm to 300mm of rainfall in the upper Missouri basin in the past few weeks is nearly a normal year’s worth, and runoff from the mountain snowpack is 140% of normal, according to forecasters.

It was catastrophic flooding from Japan’s March 11 tsunami that knocked out cooling systems at the Fukushima Daiichi nuclear power plant, resulting in three reactors melting down and producing the worst nuclear disaster since Chernobyl. This year’s Midwestern flooding has also led to a spate of rumors about the Fort Calhoun plant that OPPD and the NRC have been trying to knock down.

The utility has set up a “flood rumor control” page to reassure the public that there has been no release of radioactivity from the plant. An electrical fire June 7 did knock out cooling to its spent fuel storage pool for about 90 minutes, but the coolant water did not reach a boiling point before backup pumps went into service, it has said.

They could do without the wildfires too!