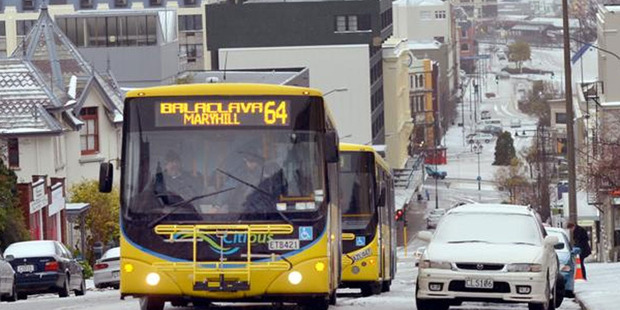 Black ice could prove dangerous for motorists in the south today, forecasters have warned.

The government’s forecasters said any water on roads in Otago, Southland and Canterbury will have frozen overnight and

Temperatures reached below freezing for much of the country overnight and in to this morning.

“It will be a cold, icy and frosty morning,” A statement said.

Dunedin primary schools will have a delayed start this morning because of icy driving conditions and at least one bus has come to grief on slippery roads.

There will be a 10am start for all primary, intermediate schools and kindergartens between Mosgiel to Port Chalmers to Waikouaiti.

The ice has also disrupted some bus services.

Go Bus Dunedin says passengers can expect delays and disruptions on the Maori Hill route and on the Helensburgh route where a bus got stuck in ice on Tuckett St.

Due to road conditions passengers should expect some delays.

One state highway – SH87 Outram to Middlemarch – remains closed because of snow.

And it’s not just the bottom of the country suffering from chilly temperatures.

Auckland recorded a low of 4.5C before dawn this morning, Wellington got down to 5C, while Hamilton was -1C before dawn.

Meanwhile, the coldest places in the South were Tekapo, which recorded -6C overnight, Queenstown -5C, Christchurch -4C and the Central Plateau of the North Island was -5C.

Today would be a calm, fine and cold day for most of the country, the statement said.

“There will be clear skies and light winds.”

The report said most of the country should watch out for another cold night tonight.