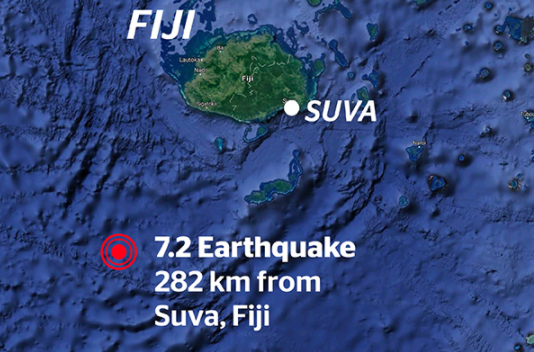 An earthquake with a magnitude of 7.2 struck 284 kilometres off the coast of Fiji at 10.52, the U.S. Geological Survey said.

“Based on the preliminary earthquake parameters, hazardous tsunami waves are possible for coasts located within 300km of the earthquake epicentre.”

People living on coastal areas were being warned to stay alert for any information and to follow instructions from national and local authorities.

A second notice put out by the Pacific Tsunami Warning Centre just after 11.30m NZT said tsunami waves reaching 0.3 to 1m above the tide level were possible for some coasts of Fiji.

“For all other areas covered by this product … no tsunami threat is expected.”

The tsunami threat has since been cancelled.

There was no tsunami threat for New Zealand, Civil Defence said.

The Ministry of Foreign Affairs and Trade said 185 New Zealanders were registered on the SafeTravel website as being in Fiji.

A message has been sent to all those Kiwis and onto the SafeTravel Facebook page.

“MFAT is aware of the 7.0 magnitude earthquake in Fiji and tsunami warning this morning.

“New Zealanders in the affected area should follow the advice of the local authorities, including any tsunami evacuation instructions and keep family in New Zealand informed of their well-being.”

Speaking to the Herald, her nephew Minay Prasad said about 1pm (NZT) they were on their way back home – near the coast – after moving to higher ground following the tsunami warnings.

“It was a bit scary for us. We felt it when we were at home. The house was only shaking for a few seconds.

“Originally, the news came up on Facebook that there had been an earthquake. And then when the tsunami warning came we just got up and left.”

Many people were heading back home now, Prasad said.

His 54-year-old aunt has been in Fiji for the past two weeks and is due back in Auckland next week, he said.

Another man, who did not want to be named, said his mother is in Fiji.

“I have just spoken to her and they informed they didn’t feel the quake but they are moving to higher grounds.”

“We were just looking at each other, watching everything shake. It wasn’t too bad, just water bottles and tables shaking).”

Another staffer, Tamanilo, said: “The tables were shaking but it was pretty mild. Not like the ones you watch [on TV], like the Japanese one, not as bad as Christchurch.

“We haven’t had any reports of damage. We are still monitoring.”

Avinesh Jobal, chief of staff at the Fiji Times, said reporters had been getting calls from people on Fiji’s west coast saying they’d felt the quake.

No reports of injuries or major damage had been reported, he said.

Staff in his office, based in Fiji’s capital, Suva, had not felt the quake.