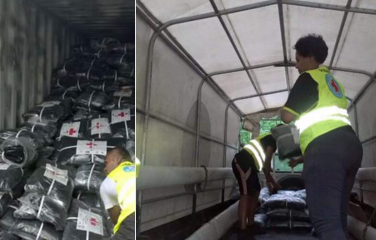 At least one man is believed to be dead as a result of Fiji’s encounter with Cyclone Winston.

There’s a state of emergency in force and a curfew, after the Category Five storm battered Viti Levu with wind gusts of well over 300 kilometres an hour.

It’s the strongest storm Fiji has ever seen.

Weatherwatch.co.nz said Winston’s eye made landfall in the north of the island last night, and did its worst for about an hour before shifting back out to sea.

At the Fiji Met Service, forecaster Amit Singh said the system was over land for two to three hours.

A state of natural disaster has been declared in Fiji, and local media say roads have been washed out or blocked by slips.

Yachts, the power network and houses have been damaged, and a bus was washed inland by a strong tidal wave.

Communications with outlying islands are down, and it’s likely to be some days before the full extent of the damage is known.

Amit Singh said the storm is now moving out to sea.

“We still have a damaging swell warning for the whole of Fiji and the heavy rain warning is still in force.”

The extent of the damage is now becoming clear at a resort in Denerau, where 350 guests spent the night camped out in a boardroom.

“There’s an awful lot of damage to gardens, plenty of trees down, plenty of branches and litter everywhere.”

Mr Burrows said there’s no sign of any major damage to the resort itself.

NZME’s Ben Rose spent the night in a boardroom at the Sofitel on Denarau Island.

He said the wind howled all night and rain lashed the island.

Staff screwed batons across the doors of the hotel and the wind and rain was worst from about 11 last night until 1 in the morning.

Charity to focus on school damage

The charity Save the Children will focus its attention on the damage in schools…once a curfew on movements is lifted.