Far North mops up after storm 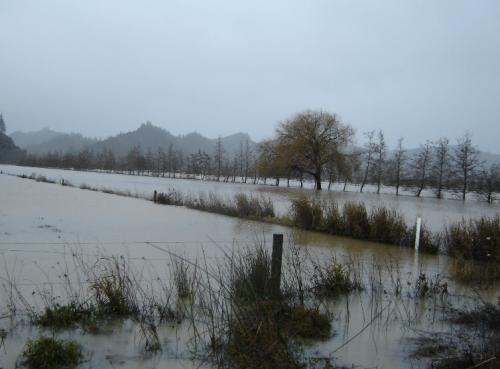 The Far North is in clean-up mode today following a wet and windy weekend.  Farmers have fences to fix and some pasture is still under water.

Federated Farmers Far North president Denis Anderson said although there was still water on some fields, the amount of pasture lost to water damage would be minimal.

“It comes at the wrong time of the year, though., with cows starting to calf. There will be the odd calf lost in the system of cold and wet weather,” Mr Anderson said.

He said there were some minor slips and damage to some trees.

He said the council was working with small Far North communities to get them to be more self-reliant and have emergency plans in place.

Mr Hutchinson said that was important because the emergency service response could take some time if the entire region was hit by a disaster.
“Northland is prone to flooding and when it happens a community can be isolated,” he said.

WeatherWatch.co.nz says rain is going to arrive again tonight but it should be mostly light.  A showery few days will follow but nothing significant at this stage, however with recent rainfall WeatherWatch will be keeping a very close eye on Northland and Far North forecasts.

More than 18,000 people were left without electricity and firefighters were inundated with calls about fallen trees and lifted roofs after the storm hit on Friday night from Northland to the Waikato region.

Trees brought down power lines in the Far North and fell on to roads, said the Fire Service.

In all, firefighters responded to more than 100 weather-related calls, including roofs lifted from homes in Kerikeri, Mangawhai, Snells Beach and on Waiheke Island and a carport entangled in power lines in Whangaripo, near Matakana.

He said at the height of the poor weather, 12,000 homes and businesses were without power.

Mr Gilby said trees in remote areas had come down on top of power lines and in some cases workers had to cut their way into bush with chainsaws.

Phone lines were also cut during the storm and “wire snaps” at 175 Northland homes could take several days to repair, a Telecom spokesman said.

The weather also caused problems on the roads with part of State Highway 10 in the Far North collapsing under the weight of a major landslide.

Police were alerted to the slip when a truck nearly rolled off the road about 6am today, Senior Sergeant Shane Mulcahy of northern police communications told NZPA yesterday.

Thank you, for these update on the situation in the Northland, it is appreciated.

I believe the people in Far North communities are a resilient kind, people, who action and rally together in their local community readily giving of their time, help and lending support in anyway possible during severe weather events that occur and affect their area.

I agree with and support Bill Hutchinson in that it is important for smaller community’s to quickly become self-reliant, be prepared and have emergency plans in place (for a long-term scenario ) for when a significant natural disaster/event hit the region.

A public meeting was held a couple of months ago in Mangonui to discuss these matters.and certainly there is an awareness amongst the local people who live in coastal area’s like Mangonui, Taipa and Cooper’s Beach the importance of having an emergency plan in place.

All to soon area’s like this and other’s will quickly become isolated and cutoff from the immediate outside world as a direct result of a significant, severe and/or extreme natural related event/s that impacted the area.

I will do a follow-up on what plans are in place and forward for the above area’s and forward on any information I recieve to you.

Well, we made it through this storm – there was a brief power cut on Sunday between 09.00 – 14:00 hrs in the area, however, I think maybe that in itself was good why? memorable impression post storm event – seeing children outside in the fresh air, walking, running around, playing, laughing and having fun with their familys, surely that must be a good
thing.

OT (off topic) perhaps? though, it is still weather related of course albeit of space weather kind *smile* erm… recent NLC – STORM activity in the Northern Hemisphere (fortunate them) – what is going on up there – out there, anyone?

Great website, we do appreciate the great work you all do here 🙂 thank you, take care.