Home > News > Fact check: What really happened in the ...

Fact check: What really happened in the Philippines? 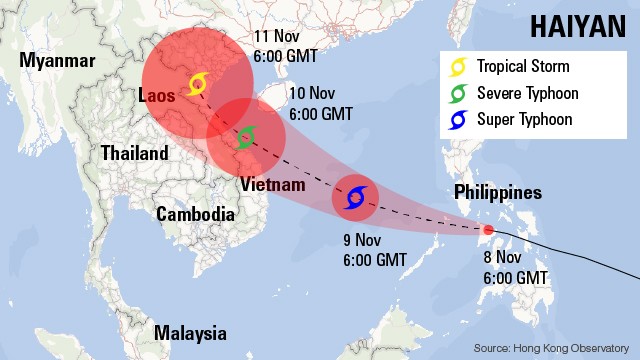 Powered by ferocious winds, the fast-moving Super Typhoon Haiyan swept Friday through the Philippines, a country of more than 92 million people all too familiar with destructive storms.
In the Philippines, they’re calling it Super Typhoon Yolanda.
Haiyan is the name given to it by the World Meteorological Organization and is the Chinese name for “petrel,” a type of seabird.
Typhoons are a numbers game, whipping up comparisons of intensity, wind speeds, gusts, rainfall and, for the people in their path, homes and lives lost, and dollars and time needed to rebuild.
On a number of counts, Haiyan could be the biggest of all, ever, anywhere.

What’s in a name?
Typhoons and hurricanes are both tropical cyclones, but they assume different names, depending on their location.
Typhoons form in the northwest Pacific Ocean, west of the international date line. They become Super Typhoons if they reach maximum sustained 1-minute surface winds of at least 240 kilometers per hour (150 mph, or 130 knots), according to the National Oceanic and Atmospheric Administration.
A Super Typhoon is the equivalent of a strong Category 4 or 5 hurricane in the Atlantic, or a Category 5 severe tropical cyclone in the Australian basin.
With winds of up to 315 kilometers per hour (195 miles per hour), and gusts of 380 kph (235 mph), Haiyan is thought to be the strongest tropical cyclone ever to make landfall anywhere in the world in recorded history.
The Philippines is in the firing line, for a number of reasons.
Path of destruction
The Philippines sits on the western rim of the Pacific Ocean, the most active area for tropical cyclones because of the vast expanse of deep, warm ocean water.
The country comprises more than 7,000 islands, leaving plenty of exposed coast at the mercy of wind and rain.
More than 92 million people live there, most of them outside the capital, Manila, where 12 million people are packed into one of the most densely populated cities in the world.
Haiyan made landfall south of the capital, while most people were sleeping, about 4:30 a.m. local time Friday. It crashed into Guiuan, in Eastern Samar, before island-hopping to Dulag-Tolosa, then to the municipality of Daanbantayan and Bantayan Island on the island of Cebu.
Previously, the strongest tropical cyclone to make landfall in the Philippines was Typhoon Reming — or Durian, as it was called by the World Meteorological Organization — which hit land in 2006, crossing southern Luzon with gusts of 320 kph (199 mph), according to PAGASA, the Philippine Atmospheric, Geophysical and Astronomical Services Administration. A state of calamity was declared, clearing the way for emergency funding as international aid agencies swung into gear.
Frequency
An average of eight or nine tropical cyclones make landfall in the Philippines each year. Only six have affected the country this year, compared with the record of 19 that smashed into the coast in 1993.
However, the Manila Observatory has warned that this cyclone is very large in diameter and has very powerful winds. Low cloud temperatures are expected to bring heavy rainfall, leading to flash floods and higher river levels, which could inundate low-lying areas.
The Philippines is covered in mountains, which drop sharply to coastal areas, increasing the risk of devastating landslides. Storm surges are also a risk along the populated coasts. Despite the frequency of violent storms, many of the buildings are not built to withstand a heavy battering from strong wind and rain.
Over the last decade, the Philippines has consistently ranked in the top five most disaster-hit countries — along with China, the United States, India and Indonesia — according to the Center for Research on the Epidemiology of Disasters, or CRED.
High costs
By international standards, the Philippines may be showing strong annual economic growth, but it’s one of the poorest countries in the world, ranking 165th in GDP per capita, according to the CIA World Factbook.
In 2012, GDP per capita was $4,500. And figures from 2009 show that slightly more than a quarter of the country’s population was living below the poverty line.
Any natural disasters deal a hefty blow to the country’s finances. As recently as October, a magnitude-7.1 earthquake hit the central Bohol province, killing more than 200 people and resulting in a recovery effort that was still underway before the onset of Haiyan.
The biggest natural disaster to hit the country — in terms of the number of people affected and the total cost of damage — occurred last year, according to the International Disaster Database.
Typhoon Bopha slammed into the country in December 2012, killing more than 1,900 people. More than 6 million people were affected, and the cleanup bill reached $1.7 billion, according to the CRED.
The Philippines may be forced to endure a steady onslaught of natural disasters, but on Friday, its people remained defiant. During the storm, an image was being shared on Twitter with the hashtag #StrongerPH. It said: “The Filipino spirit is stronger than any typhoon.”
– Images and copy: CNN