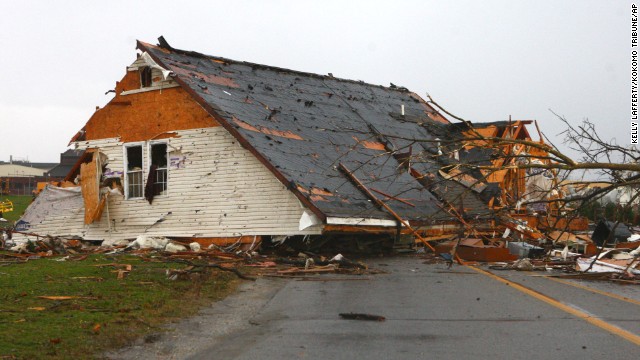 Steve Bucher knew something was ominous about the weather.

“The sky was just rumbling for 20 minutes,” Bucher said on CNN’s “New Day,” on Monday, the day after a devastating tornado outbreak destroyed his Washington, Illinois, home and dozens of others in several Midwestern states. “I told my wife I’ve just never heard anything like this in my life.”

Soon, she was begging him to go downstairs into their basement.

“Within 30 seconds, the house was literally vibrating from the direct hit of this funnel cloud,” Bucher said.

“Next thing we know, things are cracking, and glass breaking and furniture came around the corner, missed us even though it came down the hallway where we were,” he said.

The storm took most of his house down to the decking over his walk-out basement, but neither he nor his wife was hurt.

“Everything else is rebuildable,” Bucher said. “I couldn’t replace her.” 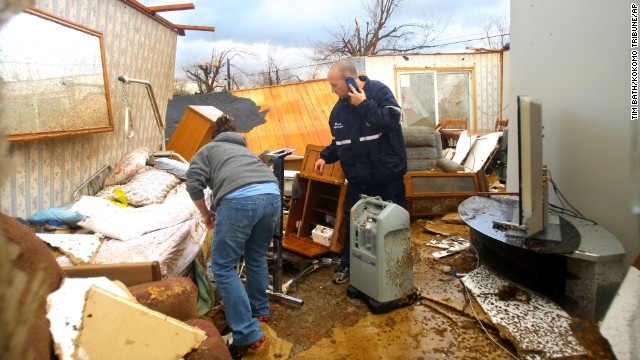 The storm that destroyed Bucher’s home was part of a multi-state outbreak of tornadoes and powerful winds Sunday that caused damage in several states, including Missouri, Indiana, Michigan and Wisconsin.

Six people died in Illinois, according to authorities, and as many as 200 people were injured statewide. Some 120 of those injuries came in Washington, said Jon Monken, director of the Illinois Emergency Management Agency. Seven of those injuries were “traumatic,” Monken said.

The storm destroyed or seriously damaged as many as 400 homes in Washington alone, Gov. Pat Quinn told reporters Monday.

Damage was also reported in the adjacent northern Illinois towns of Diamond and Coal City, in Champaign County in central Illinois, in southern Illinois’ Washington County and in Massac County — in the extreme southern tip of the state.

Quinn declared seven counties a state disaster area, including Tazewell County, just east of Peoria in central Illinois, where a tornado left parts of Washington in ruins and one person dead. 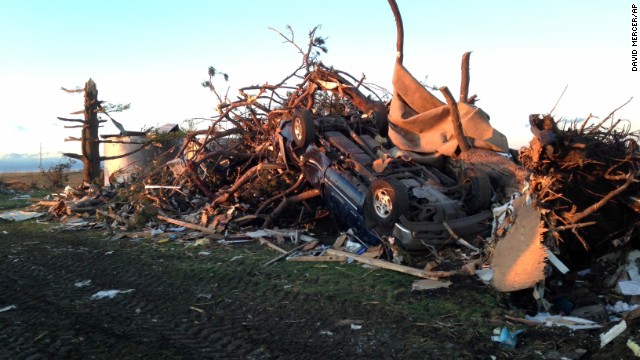 “Devastation. Sadness. People that lost everything,” is how Washington Mayor Gary Manier described the scene to CNN’s Chris Cuomo on “New Day.”

Another tornado in Washington County, Illinois, east of St. Louis, left a path of debris that stretched more than three miles, according to a preliminary survey by the National Weather Service.

While the bulk of the storm system had moved offshore into the Atlantic Ocean and the threat of severe weather Monday was small, damaging wind gusts of up to 40 mph were still possible in parts of the Northeast, CNN meteorologist Indra Petersons said Monday morning. In the Great Lakes region, 50 mph gusts were possible, she said.

Hundreds of thousands of people remained without power. 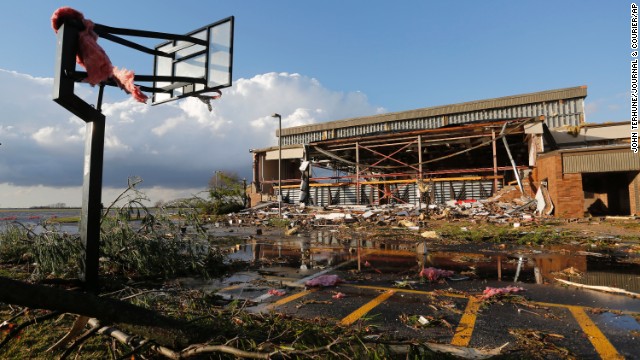 The storm struck the town of Washington around 11 a.m. Sunday, when many of its 10,000 residents were at church.

That’s where Curt Zehr was when cell phones started chirping out storm alerts and the congregation headed to the basement. His wife and son, Mike, were at home. Zehr’s wife texted to say they’d seen the tornado hit Washington, about a mile to the south.

Mike Zehr said it wasn’t long after they saw the storm hit Washington that they realized it was headed straight for them.

They took to the basement and within a few minutes, Mike Zehr said, the house exploded with the loudest sound he’s ever heard.

“The next thing we know, it’s completely quiet and the sun’s just shining through the stairs in the basement,” he said.

And their house was gone.

Dozens of others had similar experiences. 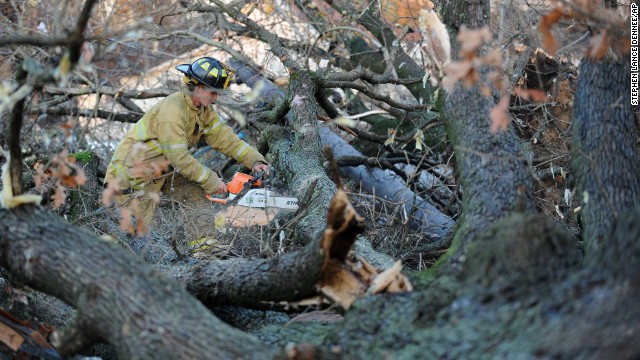 “It was complete destruction,” resident CNN iReporter Anthony Khoury, who filmed the tornado tearing through his neighborhood, said Sunday. “There are people in the streets crying.”

Resident Michelle Crumrine said the winds swept her home and everything in it clean away.

“A lot of people have a pile of rubble still, and I don’t have anything,” she said. “It’s gone. I don’t know where it went.”

The Washington tornado killed 51-year-old Steve Neubaurer, who was found near his home, according to the Tazewell County Coroner’s Office.

On Monday, a National Weather Service survey team confirmed the storm had winds of 170 mph to 190 mph, producing EF-4 damage, the agency said. Earlier, the weather service had said such a confirmation would make the tornado the most powerful November twister in the state since at least 1950.