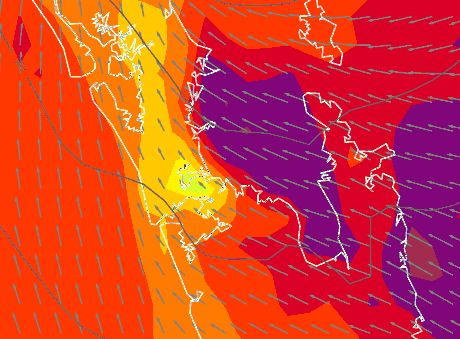 A low pressure system north of New Zealand is this morning brightly showing up on the satellite map at WeatherWatch.co.nz as the system intensfies on its approach.

WeatherWatch.co.nz is now forecasting the low to track close to Auckland on Wednesday – but the severe weather for the upper North Island will arrive this afternoon and evening, ahead of the centre.

At this stage Coromandel Peninsula may be the region most exposed to severe weather, with the strongest winds and some of the heaviest rain hitting the area.

“Coromandel Peninsula is a rugged part of New Zealand with the ranges almost a kilometre high in places, allowing the region to act like a giant dam in the sky, blocking the rain clouds and turning the forest into a rainforest very quickly”.

“And just like how water roars down the other side of a dam that’s exactly what the winds do for western parts of Coromandel Peninsula and into Eastern Waikato, picking up speed and often gusting well above hurricane force”.

The Peninsula is well known for being exposed to storms, some of the peaks of the ranges can capture half a metre of rain from a single days rain event.  This can then lead to significant slips and flooding across the peninsula.

Heavy rain may also cause issues in western BOP. The risk for heavy rain mainly lies north of Tauranga but could affect any western areas. 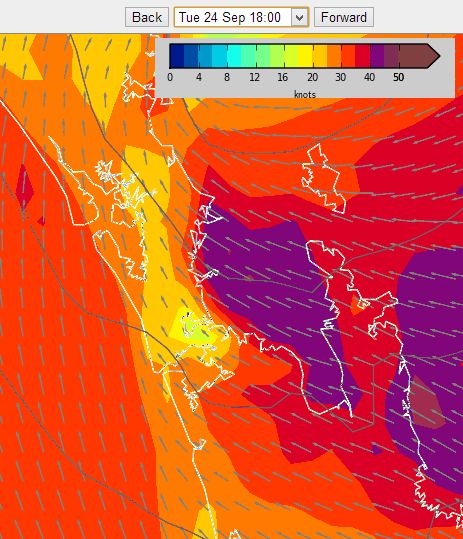 To add to concerns, the worst of the winds – potentially sustained at around 100km/h and gusting higher – could help bring down trees and powerlines.  The strongest winds are wrapped around the southern quarter of the low – and Coromandel Peninsula will stick right out into the middle of this area.

Along the western side of the Peninsula and residents of eastern Waikato and the Hauraki Plains know all too well what might be coming.  “You see a dramatic escalation in wind speeds when it comes over to the western side of the Coromandel and Kaimai Ranges from these types of storms.  From this storm we may be seeing gusts of 150km/h plus in this particular zone” says Mr Duncan.

But further back up to Coromandel Peninsula – Rain will become heavy across Tuesday afternoon and will set in with torrential falls in the ranges and down to sea level by late afternoon and evening.  Flooding is likely for smaller streams and larger rivers and flood prone plains should be monitored. It is advised to move stock away from flood prone waterways. Rain will ease after midnight and will be off and on during Wednesday.  On Thursday rain may return but this time coming from the west.

Windwise, the direction will be mainly SE, turning Easterly late afternoon then NE into the evening.

Winds will rise to gale (60km/h) in the afternoon with SE gusts along the western side of the ranges of up to 150km/h by late afternoon or evening in certain areas.   Winds may shift from SE to E as they peak, which will expose Thames and other western areas (Te Aroha further south) to damaging gusts.

Gales will ease overnight and into Wednesday morning as the centre of the low moves in.

Rain could be heavy for a time on Tuesday afternoon – especially north of Albany and about the Waitakere Ranges.   Winds may be the main feature of this system for Auckland, with gusts of 110km/h possible late Tuesday afternoon in exposed coastal areas of the east – in particular, WHANGAPARAOA, GREAT BARRIER ISLAND, WAIHEKE ISLAND, HOWICK to HUNUA RANGES (coastal).  It’s hard to say which suburbs will and wont get gales – but power cuts are possible in ANY suburb.

Even if not stormy where you are (which could be a big chunk of the city due to the georgraphy of the upper Norh Island) this is definitely a good reminder to have a Survival Kit.  Visit Civil Defence for more info.

NORTHLAND
Northland is also exposed to this low with the centre of it making a direct hit to the region on Tuesday evening.  Some of the heaviest rain may affect eastern Northland on Tuesday afternoon with a risk of surface and flash flooding – especially on top of the weekend’s thunderstorms.  Strong to gale force winds are expected but severe gales may be limited only to exposed hills and exposed coastal areas in the east and south east.  The westerly change behind the low later on Wednesday and into Thursday may be even stronger for Northland.

Thunderstorms?
No repeat of the weekends thunderstorms are in order – however any sub-tropical low could form a few thunderstorms here and there.  Note, the thunderstorms on Saturday night were created, in part, by fairly calm weather.  This will be anything but calm for much of the North Island.

– WeatherWatch.co.nz (with special updates across Tuesday)

Raining steady here in Whangarei. Would say its not of any great proportion….I’m in a fairly sheltered part of the city so not particularly windy either.

I see there are no warnings in place for Tauranga, yet everyone is predicting that we may be hit. There seems to be no reasoning behind the warnings, one weekend we get one and receive 9mm of rain, then when we could potentially receive considerably more, there is no warning. Is there a method in the madness?

We have repeatedly asked MetService to work with us in this area – as we believe we could greatly improve how they communicate their warnings and improve accuracy. But due to comemrcial reasons MetService aren’t willing to work with us, so instead we work with NIWA and Civil Defence and GeoNet.  We advise you take your concerns directly to MetService as we’ve given up for now.  As for Tauranga, you’re on the edge of the severe weather (outer edge) – but certainly heavy rain could lead to flooding north of the city (and in smaller pockets elsewhere). Very rough seas too.

hit all of a sudden here in Paeroa, very strong and gusty, already blew my metal deck chair off deck, now all secured in sleepout.

If it goes westerly its not too bad here but the SW is like a wind tunnel here.Easterly is ok too.